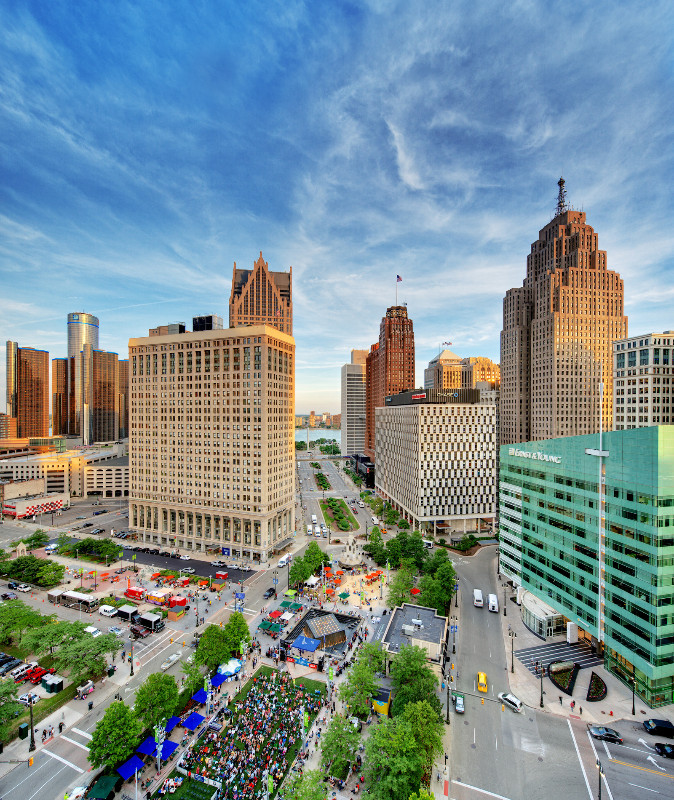 From businesses and special events to new developments, Downtown Detroit is booming. Behind the success of the city's core neighborhood is the Downtown Detroit Partnership (DDP), a nonprofit organization that works to strengthen and support downtown Detroit through programs and initiatives.

"People are amazed when I tell them all the ways DDP is responsible for keeping Detroit vibrant and dynamic," says Kailey Poort, the director of communications and marketing for the Downtown Detroit Partnership. "We are a nonprofit that provides supplemental clean-up, landscaping, lighting, hospitality and wayfinding services for all who live, work, play or visit downtown."

With the help of DDP, civic, corporate and philanthropic leaders come together to advocate for the city's continued growth and development.

Four of DDP's key initiatives include:

"DDP hosts more than 1,600 free events in its parks and public spaces and attracts more than 2.5 million visitors annually at these events. We want downtown Detroit to be a destination, a place for everyone," Poort says. "Offering a wide variety of programming in our parks - everything from headline concerts to Glow Yoga - is an essential component of our success."

Planning is another key to success. DDP collaborates with City of Detroit, the Detroit Economic Growth Corporation, and numerous additional partners and stakeholders to implement a collective, unified vision for downtown Detroit.

Whether it's winter, spring, summer or fall, there's something unique to see and do in downtown Detroit. If you are seeking a beach with lounge chairs, umbrellas and sand in the heart of Detroit's Campus Martius Park or a place to enjoy yoga with your dog (DOGA), DDP is instrumental in making - and keeping - downtown Detroit as the ideal destination.

In June 2019, DDP kicks off its extensive summer programming, including Movie Night in the D at Campus Martius Park, Yoga in multiple parks, Downtown Street Eats with the metro Detroit's favorite food trucks in Cadillac Square and Beacon Park, Summer Concerts at Beacon Park and so much more.

Programs in the fall season include a Halloween Party, Parktoberfest that plays on Oktoberfest, and the U-M vs. MSU Big Game Watch Party. DDP kicks off the holiday season with its nationally recognized Annual Tree Lighting Ceremony and Light Up Beacon Park, which brings more than 50,000 people downtown to Campus Martius Park.

"DDP is so proud of how the Annual Tree Lighting Ceremony has evolved," Poort says. "We have big plans to keep growing this tradition and celebrating it with the Detroit community."

DDP also serves as an incubator for organizations like MoGo, Detroit's innovative bike share program. The MoGo program offers an active transit system of on-demand bikes, serving a wide range of people and needs. People in metro Detroit can purchase a pass and pick up a bike from one of 44 different stations. Riders take take long or short trips throughout the city, making for an active way to explore Detroit.

"There's plenty of fun waiting for you here," says Poort, "and the Downtown Detroit Partnership welcomes you."