How to Identify and Stop a Grandparent Scam in its Tracks

Aging parents are at an increasingly high risk for fraud attempts like the 'grandparent scam.' Michigan experts weigh in on the most common scams – and how to best protect seniors. 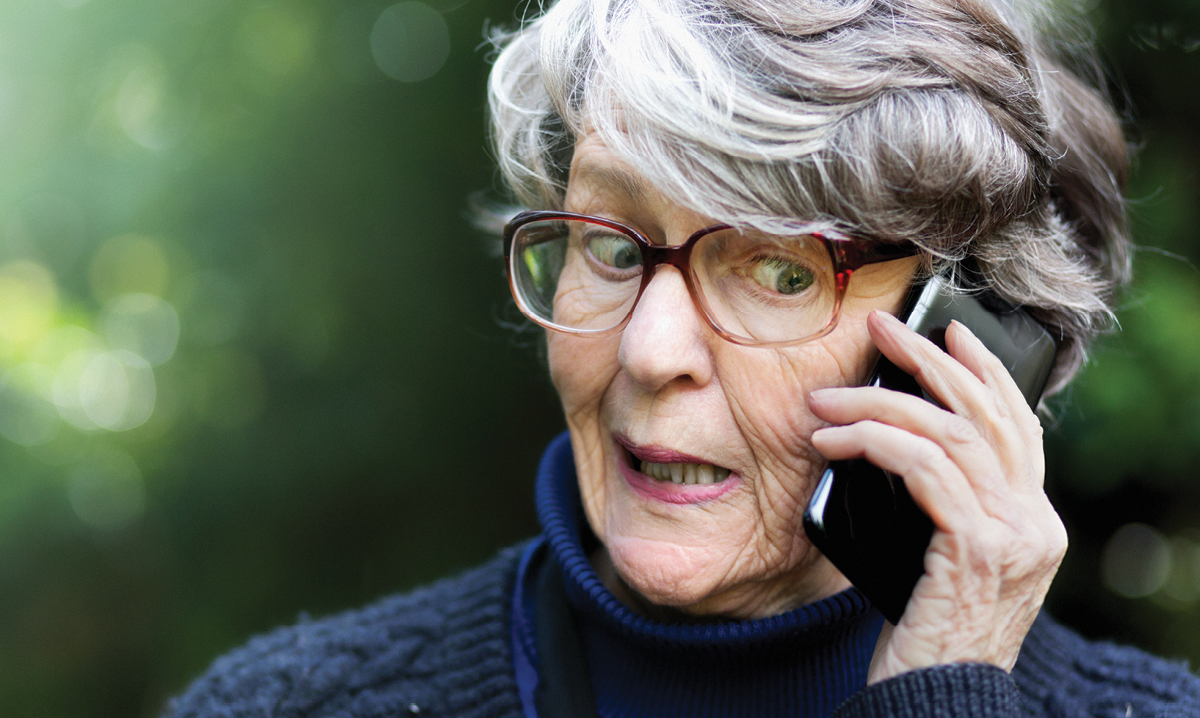 Grandma, it’s me!” a young voice says through the phone. “I’m in Mexico and I need money for medical care. Will you help?”

If your aging parent received this call, how would they respond? What if they were pressed for time – the money had to be sent right then or the grandchild would be at risk?

For 87-year-old grandmother Melva Hanna, it’s simple. She’d recognize the call for what it is – a grandparent scam – and she wouldn’t dream of sending the money, although she might have some fun playing along for a while.

“She’s been called several times on the grandparent scam,” explains her daughter, Kelly Rossman-McKinney. “She always uses a grandson’s name that’s not the name of an actual grandson. She’ll say, ‘Oh, Marvin, it’s so good to hear from you!’ She’ll let them go on and on … this is like her amusement.”

Eventually, of course, her mother comes clean: “Well, you know, if I really had a grandson named Marvin, I might fall for this.”

Unfortunately, not all seniors would dismiss the call as fraudulent – and this particular scam is just one of many clever and conniving attempts at swindling cash from the elderly.

As communications director for Michigan Attorney General Dana Nessel, Rossman-McKinney knows just how common it is for seniors to unwittingly take the bait, handing over hundreds or thousands of dollars to scam artists and putting their financial well-being at risk.

“You have to encourage seniors to be on their toes,” she says. “They are perceived as a vulnerable population, and they’re not as vulnerable as people think they are. But they have to be really on their toes.”

“Over 75 percent of individuals that are victimized are victimized by members of their family. Another 10 percent are victimized by close friends or companions,” she explains. “Many people may not realize it until it’s been going on for years, because they trust the person that is taking their money.”

Others may avoid reporting over fears for what would happen to the perpetrator. “They may be afraid to report because the person that is stealing from them or using them is the only person that’s taking care of them,” Stinedurf says. “If the person that is preparing dinner for you, providing your medication and taking you to your doctor’s appointments is suddenly out of your life, then who is going to take care of those things?”

Seniors may also think telling family members about being victimized could imply an inability to care for oneself, and they may fear being placed in a nursing home, she adds.

According to the National Council on Aging, some of the most common scams targeting seniors involve communications about Medicare, prescription drugs, funeral planning, investment schemes, reverse mortgages and sweepstakes. IRS impersonators alone have swindled $72.8 million from unsuspecting Americans since 2013, CNBC reported this year.

With an aging population, the threat is only growing, says Christopher Berry, a certified elder law attorney and founder of The Elder Care Firm based in Brighton.

“Especially as we’re living longer than ever and with things like Alzheimer’s and dementia picking up, it becomes more and more of an issue as we have individuals with diminished capacity,” he says. “With the advent of new avenues of communication and new technologies, now you have things like email phishing and you have a senior who may be more prone to click on the wrong thing or give out the wrong information. As you age, it’s hard to stay on top of these things.”

And once a senior responds to one scam, a snowball effect seems to ensue.

“Once someone falls for this, then they just get bombarded from all sides – mail, phone call solicitations. It’s pretty nefarious,” Berry says.

“It could be someone who has agreed to help them, like a handyman. They believe they can trust this individual, so they give the individual access to their financial information – and the individual who has that access oversteps the understanding that the two of them had,” Miller says. “The charges have now changed from authorized to unauthorized, and this needs to be reported.”

Seniors may hesitate to confront these situations, especially if they’re unsure whether they’ve made a mistake, but “there’s no reason for somebody to feel embarrassed if they are going through this,” she adds. “It’s better to deal with it sooner than later when less money has gone out the bank account door.”

The adult child’s role in prevention

Preventing your aging parents from being victimized by a senior scam requires an ongoing conversation about the risks and how to respond to them. Parents in the “sandwich generation” can play a key role in this, Stinedurf notes.

In addition to keeping in close contact with your aging parents and looking out for warning signs – like sudden money problems or suspicious changes to a will or power of attorney – adult children can educate their parents on common scams and how to spot them. If the conversation feels awkward, you might consider an alternative approach.

“Almost bring it up as an informational thing that they read versus something accusatory,” Berry suggests, like “‘Hey, I saw this article in Metro Parent’ or wherever and bring it up at the next family gathering.”

Be sure your parents know how to decipher a legitimate call from a fraudulent one, Miller adds. If a caller claims to be from DTE or the IRS, for example, “they should hang up after learning what that person is trying to tell them and then call back the number that they know for that institution,” she says. “Take a second, back up and think about whether this seems out of place or different from how this organization has contacted you in the past. It is also good to ask someone you trust if they feel like this call is ‘off’ and maybe they can help sort out what’s going on.”

Still, being involved in your parent’s daily life may be the most meaningful support of all.

“Being a regular part of their parents’ lives and checking in on them on a regular basis is one of the best things that a child could do,” Miller says, emphasizing the importance of communication.

“People need to talk about this stuff. I think there’s been a taboo associated with talking about what will happen to our parents as they get older. I want the stigma of having those discussions to be removed and for people to have open conversations about what they want their life as an older adult to look like.”

How to Fight Back

If you or a loved one has been the victim of a scam, know that you can take steps to limit the damage, recoup your losses, hold the fraudster responsible and – importantly – to help keep others from being victimized, too.

In addition, adult children should make sure their aging parents are aware of the following “red flags” that could point to a senior scam.

To report a scam or ask about a potentially suspicious communication, call the Michigan Attorney General’s Consumer Protection Division at 877-765-8388.