Assessing a Lifetime of Treasures When an Aging Parent Moves

Metro Parent's editor-in-chief explains how she went about assessing a lifetime of treasures and helping her mom decide on what to leave behind as she moved from Florida to Michigan. 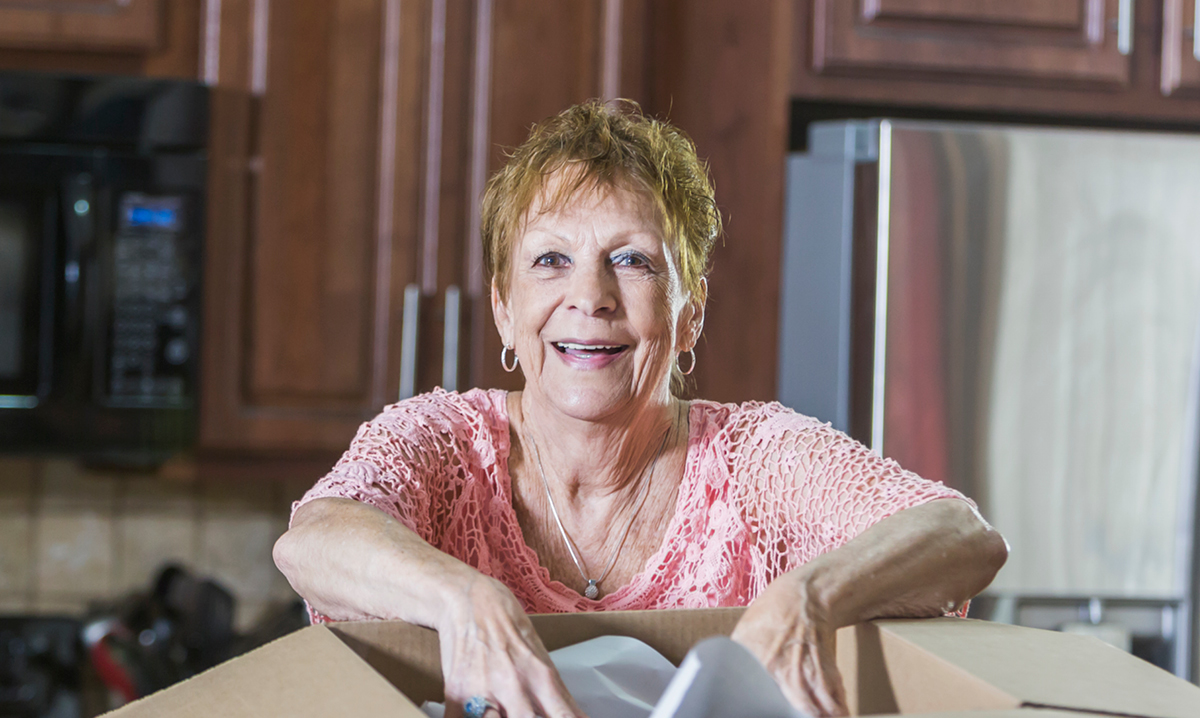 Pinking shears shaped like a stork. Antique oak sewing chest. Collection of Harmony Garden treasure boxes. Family photos, like the one of my parents all blotto and happy at some swinging ’60s party.

Beyond this small list, I couldn’t care less about my mom’s “stuff.”

Truth be told, I could probably narrow it down to just those pinking shears. If you don’t know what pinking shears are, you clearly don’t sew. Neither do I. But my mom did for as long as I can remember.

So, whenever I conjure up a memory of my mom from when I was growing up, those tiny shears shaped like a stork are front and center.

Whether she was using them while making clothes for my Barbies or creating a quilt or mending my dad’s pants, those stork shears are intrinsically tied to my childhood and my mother. So, I do treasure them – unlike most everything else she owns.

For years my mom has commented on some possession or another and exclaimed with a smile, “You’ll get this when I die,” as if she was passing on the queen’s jewels.

She’d look at me with those searching eyes, wanting me to smile back and seem happy about the prospect. I never was – except about those stork shears.

Turns out I’m not alone. An article last year in the New York Times detailed the dilemma. So many baby boomers are facing the reality that their kids don’t want the “treasures” they’ve accumulated over a lifetime.

One woman felt so guilty telling her mom she had no use for her Lenox china.

Me? I had no problem telling my mom that her Lenox china would never see the inside of my cupboards.

So, when my mom was moving back up to Michigan from Florida, and we were trying to figure out the smartest, most economical way to get her up here, I didn’t feel guilty tossing out the idea of leaving most of her stuff behind.

The cost to have her stuff hauled across the country ranged from $3,000 to $10,000, plus incidentals like hotel and flight if I headed down to lend a hand in a U-Haul scenario.

That’s a lot of money to lug an unremarkable 40-year-old bedroom suite and some Country French-style Ethan Allen furniture that at one time would have been called shabby chic but was now just plain shabby. Plus, some other odds and ends.

So, I suggested to my mom, “How about we just load up your Ford Edge (it’s roomy) with the most important stuff and use that moving money to get some new things?”

Now, it’s important to note that my mom can be nostalgic, but she also really likes new things. So, it was a toss-up how she’d react.

I pictured her almost twitching with confusion over how to feel. “But my stuff? Leave it behind?” one side of her must have screamed. “Wait! Did you say new furniture?” as the other side lit up.

In the end she saw the beauty in my plan, but the real test was when she was faced with the limits of her Ford Edge cargo space.

In the weeks before she moved up here, she had a handyman reconfigure how he packed the car to optimize space. It was like a Tetris test for her worldly treasures.

Some things got the heave-ho based on sheer size and ease of replacement (so long, 8-year-old coffee pot). Others, like that antique sewing chest, had to be part of the puzzle.

At one point she was really struggling between bringing her wedding china and some sewing supplies she’d accumulated over the years.

This was my mother’s version of a Sophie’s Choice. Every time I talked to her she’d share a different decision she’d ask me to validate.

“I’ve decided to bring the china. It might take a while to replenish all of my sewing supplies, but they aren’t as special as the plates. Don’t you agree?”

I remained Switzerland. “Whatever you think is best, Mom. It’s your decision.”

Finally, after a week of back-and-forth, I broke down and spouted off: “Mom, why don’t you pack the sewing supplies in a box and mail it up here?”

Almost as soon as I uttered this numbskull notion I knew I was in trouble.

“Oh, that’s a great idea! Maybe I could mail all of my bedding too. That would save space.”

I’d opened Pandora’s box – and it was about to be sent Priority Mail (don’t ask).

In the week before my mother and her filled-to-the-brim Ford Edge arrived, six of these boxes showed up on my porch, costing a grand total of almost $300 in shipping.

In the end, my mom made some tough choices – some she didn’t even mean to. An afghan my grandmother made accidentally got left behind. Some old cookbooks she meant to surrender somehow made the trip.

There is no doubt that she had some regrets. She’s felt that mix of sadness and discombobulation from realizing that “thing” you’ve gotten so used to, that has made up the tapestry of your life, or what you think of as your life, is gone.

Some of these things have occupied the same space as my mother for more than 50 years. They’ve lived with her longer than I have, longer than my dad did.

Yes, it’s just “stuff.” But it’s bigger than that.

Those serving platters and hand-knit sweaters, the knick-knacks and pots and pans, they are the collection of her life.

Together and piece by piece, they tell her story – good and bad. And by looking at any one of those things, she’s back at that time and place, even if it seemed so unremarkable at the time.

Those holiday glasses we got at Arby’s in the early ’80s, this will be our first Christmas without them.

But some of the new stuff has taken the sting out of the loss of the old. Case in point: my mom’s new power recliner.

I knew she’d be spending most of her waking hours in this spot, so it was important that it was comfortable and easy for her to get in and out of. So we headed to Art Van to test out some options.

Like Goldilocks, she settled on the one that was “just right.” Less than a week later, it was delivered, set up and she’s been in some state of happy repose ever since. She says it’s the Cadillac of recliners, the best chair she’s ever owned.

“You’ll get this when I die,” she adds with that searching smile. I look away and say nothing.

I still only care about the stork shears.

Try these things to do with your kids in Macomb county while they’re out of school for mid-winter break.
Read more
Macomb County Education