Here are tips to bridge the gap between your children and their grandma and grandpa, especially if you live far away from each other. 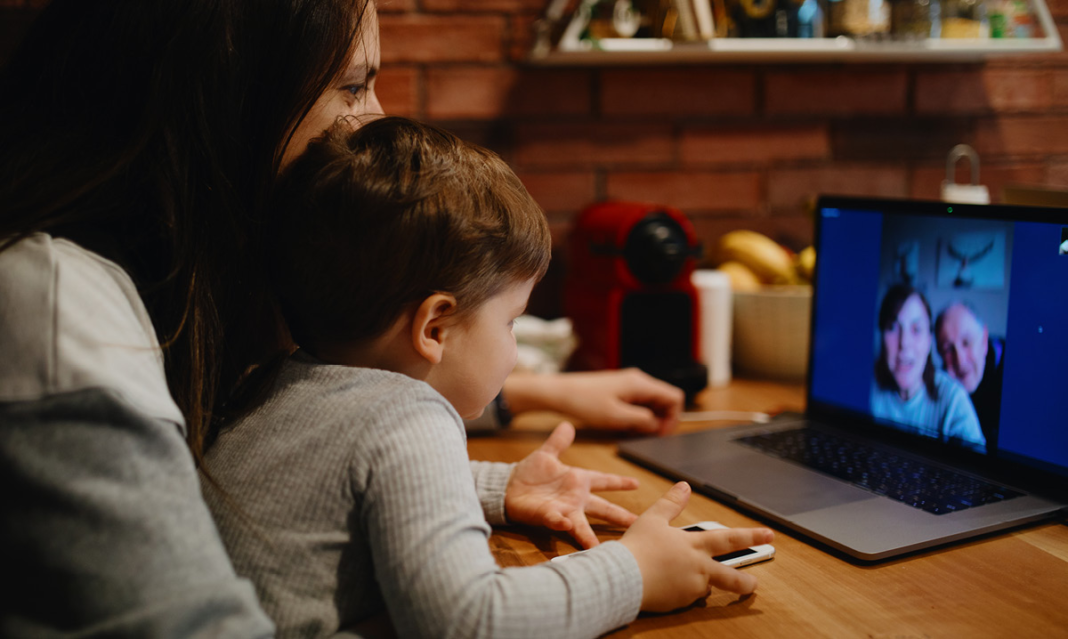 Lamenting that her parents didn’t get to see her two girls more often, Nyree Cheff had an idea: a shared journal. As a gift, the Trenton mom bought a journal to send to her parents, Denise and Jerry Bell, who live in Georgia and see the grandkids twice a year at the most.

Both of her daughters — Ava and Zoe — wrote or drew a message to their grandparents. The shared journal has now been going back and forth between Michigan and Georgia for the past year.

“It does seem like the journal has brought them closer,” Cheff says of the pen-pal endeavor between her children and their grandparents. “You learn a lot about someone by seeing what they decided to write versus what they decide to say.”

More recently, the journal has been filled with messages about an upcoming visit.

The ongoing notes have helped the girls get to know their grandparents, so that they’ll have plenty to talk about once they do get together in person, Cheff says.

Today, especially during the coronavirus pandemic, going long distances to see grandparents is becoming more the norm. While 69 percent of grandparents live within 50 miles of their closest grandchildren, according to a survey from AARP, another 10 percent said they have to go more than 200 miles to see their nearest grandkids.

And 43 percent report that they travel more than 200 miles to see those grandkids that live the farthest away. The survey also revealed that grandmas and grandpas who said they didn’t see their grandchildren very often pointed to distance as the reason by 67 percent.

And yet a recent study by Aetna has found distance isn’t the only barrier to grandparent-grandkid connection. This generation of grandparents is also opting to spend more time pursuing their own travel and recreation interests and don’t necessarily see connecting with the grandkids as a priority.

The good news is that whether it’s due to distance or a generational disconnect, the gap can be overcome — with a bit of effort, some creative ideas and a little help from technology.

The first time I tried to get my parents, who live over 1,000 miles away, to download Skype to talk to my kids, the answer was “no.” My parents explained they didn’t feel comfortable downloading an application from the Internet (no, they’re not on Facebook, either).

But during a visit I talked them into letting me add the software to their computer and then showing them how to get it to work. Many grandparents may share the same reluctance (or confusion) when it comes to online call services like Skype.

Depending on your kids’ grandparents’ comfort level with technology, you might have to experiment to see what works best for both parties. For example, if you and the grandparents have iPhones or iPads, maybe the best way to chat is through FaceTime.

Then again, if the grandparents prefer talking on the telephone, maybe sending regular text messages with pictures or short text videos is a way for them to “see” the grandkids more.

Cheff says that her kids Skype with her parents about once a month. It can be difficult between her kids’ and parents’ busy schedules to find a good time to chat.

“We usually have to plan about a week ahead of time to coordinate a time that works for everyone,” says Cheff. “My kids are crazy busy with activities and my parents are both working.”

When your kids are able to talk to grandparents either on the phone or through online channels, try to think of a way to make it more personal.

“His joy is to read books to the kids over Skype,” says Cheff, who adds that her youngest daughter tells the story by looking at the pictures when it’s her turn to “read.” Right now, the group is working their way through the Fancy Nancy book series. When it comes to their time with grandma, Ava and Zoe put on performances.

“My oldest daughter will sing a song, and my little one likes to show off her ballet moves.”

Besides trying to connect in real time, you can give grandparents a play-by-play look at your kids’ lives through various online channels. On Metro Parent’s Facebook page, several parents said they used privacy settings on social media platforms like Facebook and Flickr, so that only family could see the photos they post of kids.

Take a look at my teen’s cell phone and you’ll find that, along with her BFF, she trades a steady stream of texts with her grandma.

For many teens, texting has allowed them to form relationships with their grandparents in ways they wouldn’t be able to otherwise. A 2012 study from AARP and Microsoft Corp. found that more and more social technologies are helping teens and grandparents grow closer.

Technology isn’t the only answer when it comes to reaching out to grandparents. For Cheff, pairing good old-fashioned mail with Skype chats and phone calls helped her kids grow closer to grandparents.

Teach your kids how to write and address a letter to their grandparents.

Don’t forget that mail – and not the electronic kind — still holds special appeal to most kids. They can wrap up school art projects, create pictures or write letters to send to grandparents. Unlike online conversations, kids can hang on to the letters they exchange with grandparents and read them over again whenever they want.

When the return package comes from the grandparents, Cheff’s kids love to read through the messages together.

“My 7-year-old will read hers and then read the message for her younger sister,” says Cheff. “They have this little bonding moment.”

Kodak recently updated its in-store photo-generating kiosks so that you can create prints and gifts for grandparents from pictures on your smartphone and Facebook.

Kiosks are located at various area CVS and Target stores. Download their apps to find the closest store to you.

Once you’re at the store, the app enables the kiosk to tap into your stored pictures and your Facebook account. You can sort through, select and edit any of the images you want. Create photo books, greeting cards, calendars and more with a few clicks.

This post was originally published in 2013 and is updated occasionally.

One local mom shares why she has celebrated her daughter's autism diagnosis and how it has impacted the way she parents.
Read more
Advice