How a Cat Named Max Helped With the Loss of Mom

A local mom tells the story of a cat named Max – a former stray who helped her husband cope when his mom was sick and comforted him after she passed away. 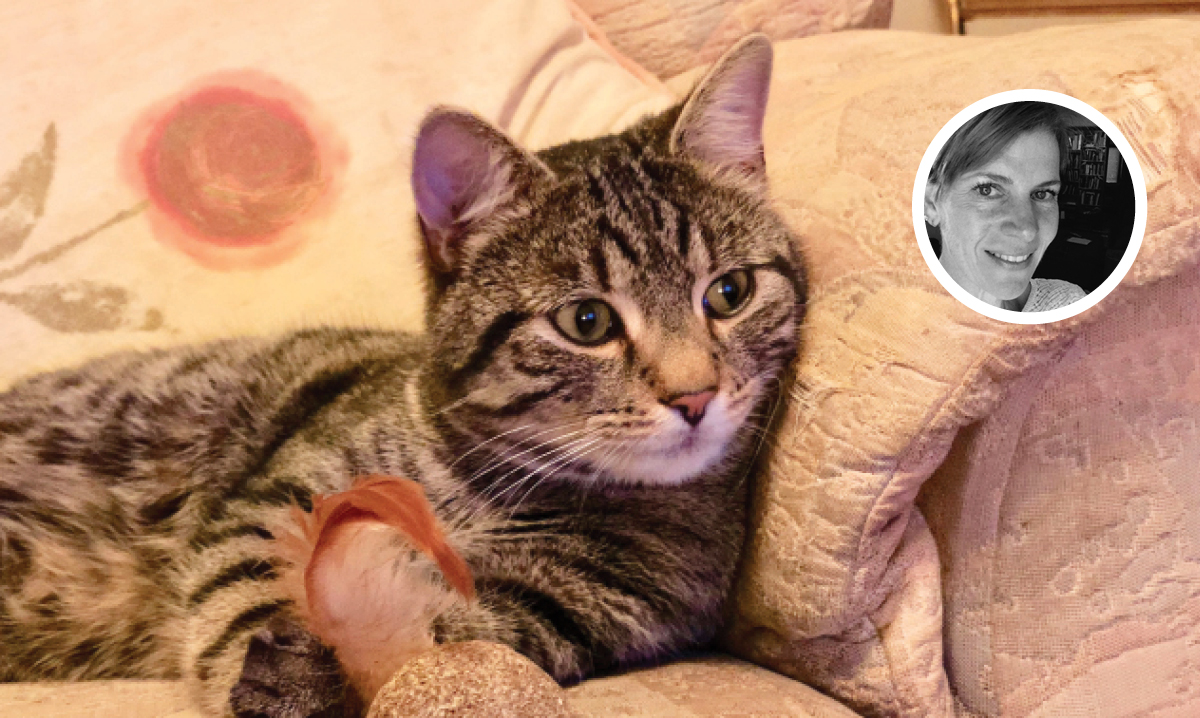 “Who is taking care of Max?”

It was the question my mother-in-law Dorothy asked again and again in her final weeks of life.

Her son, my husband David, calmed her worries because he was, in fact, taking excellent care of Max – but not the black-and-brown spaniel Dorothy was asking about. Nope, that Max had died decades prior, long before David moved from England to attend college, where we met, eventually married and set up our home near Detroit.

This new Max wasn’t even a dog, but a stray tabby that meowed at the back door, looking for food in exchange for snuggles.

In healthier days, Dorothy would have shooed Max away. To her, cats weren’t pets; they were opportunistic nuisances. Yet Max became a much-needed companion that helped David cope with his mother’s death.

I stayed home in Detroit during the many weeks David spent in England at his mother’s bedside. I never saw her writhe in pain from the bowel cancer only she knew she had.

She, like others who grew up in WWII Europe, kept her secrets well. Her city-dwelling parents braved the German bombs, while she and other children were evacuated to the country to live with strangers. She was widowed early, raised two sons and lived alone for more than 40 years.

Dorothy was a survivor, but she also suffered a lifetime of depression and anxiety. She never talked about her mental health and perhaps never realized that she passed on these illnesses to my husband, who, in time, struggled to cope, just as she did.

When it became clear that Dorothy’s illness would be her last, David took a leave from work and returned to his boyhood home in the rain-soaked northwest of England. In the evenings, he called me with stories about his days spent at the hospital and, eventually, hospice. Those evenings, I wondered if my own voice betrayed my ballooning worry about his mental health. How was he coping alone?

By then, Max the cat had moved in. As David managed his anxiety on the sofa each evening, Max was sprawled on his back, trusting and warm, grateful for shelter and companionship. He was young and alive. Yes, David was taking care of Max. And Max was taking care of David, too.

On the morning Dorothy died, just a few days before her 89th birthday, David found Max sitting in Dorothy’s bedroom, on her bed – the place she sought refuge when the world became too dark for her.

He asked me if I thought this was a sign. Was Max filling the space that Dorothy’s death had just created? I knew Max had filled that space from the first purr.

For weeks, we had discussed the idea of making Max’s adoption permanent. With Dorothy gone, my job became clear. I had to figure out how to get Max home to Detroit. I half wondered if David would change his mind, or – my greater fear – if Max would simply disappear one day. And then there was the truth that there are plenty of cats in need of good homes, right here in Detroit.

Yet Max was special. He was a link to Dorothy, even if she was unaware that he existed and was not, in fact, a spaniel.

So, while David waded the red tape of securing a death certificate and planning a funeral in a country he hadn’t lived in for most of his adult life, I learned there are pet relocation services that exist solely to transport your pup or kitty to anywhere on the globe.

Eventually, I joined David in England to mourn with extended family. We made time to take Max to the vet and secured papers declaring his fitness to fly. Then we booked our newest family member on his own flight, with an overnight stay at the Frankfurt Airport pet lounge.

Throughout all the comings-and-goings of family and funeral, Max was always free to return to his life on the street. As we packed up and gradually emptied the house, Max slipped out open windows and doors, but always returned, choosing family over freedom.

I believe he needed the security David provided during that month, along with his warm lap and bowl filled with food. And I know David needed to feel the security of caring for something that, unlike his mom, was going to live.

It’s a year later now, and we often talk about the time when Dorothy’s fate connected with Max’s. We’re grateful that the simple act of welcoming a cat made a difference to the difficult and inevitable loss of a parent.