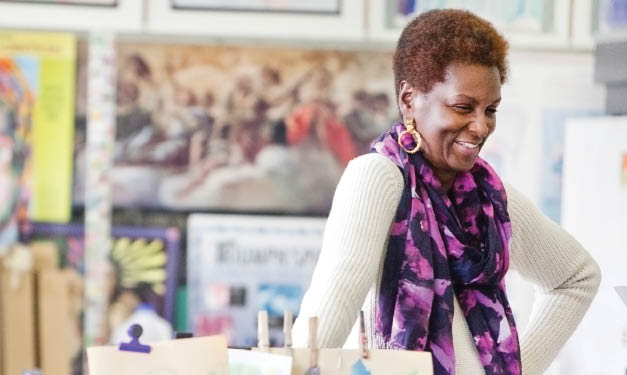 Imagine going to school where a roughly 8-foot tall robot resides and a massive city of geometric shapes spans the length of the auditorium.

This is the imaginative world that Thirkell Elementary School students enjoy – and get to have a hand in creating – thanks to art teacher Linda Rice.

In her classroom, creativity has no bounds. The art projects the students create with Rice are anything but ordinary – and they have more depth than just a simple colored page. Rice turns each activity into an opportunity to reiterate lessons from other subjects while providing the kids with a space to let the artistic juices flow.

“I try to do whatever I feel will interest the kids and get a concept across to them,” Rice says of her class projects.

Art with a focus

Last school year, Rice got all of her classes involved in building a geometric city as a way to teach them the shapes they needed to know for the Michigan Educational Assessment Program, or MEAP test.

But the project went beyond just shapes and colors. It became a team project. While kindergartners brought in tissue paper rolls with which to build, the older kids utilized their writing skills to plan what they wanted the city to look like, including how tall the buildings should be. After completion, the colorful cityscape included stores, restaurants, a city hall and even a fishpond. Rice even thought to create a landfill for the paper scraps from the shapes.

The robot, Cassidy, is made up of Detroit Public Schools “I’m in” lawn signs and wire, and served much the same purpose: to teach geometric shapes, Rice says. The ‘bot was originally made for the DPS “I’m in” contest, and Rice’s students helped bring her to life.

“The students were in here, they named Cassidy, (and) we decided how big Cassidy was going to be,” Rice says. Today, Cassidy meets visitors near Thirkell’s front office, and she’s complete with moveable limbs and a head of curled wire for hair.

Mixing the different lessons and skills with art is something Rice says has to happen. “They can’t think that, ‘Well, we’re in language arts, so we do these kind of skills and only need them in here,'” she says. “They need to understand that we need them everywhere.”

And while they’re learning academically, they’re also picking up little life lessons along the way.

“I tell them to sketch lightly whenever we’re drawing something. We don’t use erasers in here. Then you can draw right on top of it, and that’s where a lot of our creativity comes from,” she says, adding, “Mistakes aren’t really mistakes. They’re just challenges to make us better.”

Growing up in Detroit, Rice was the youngest of five kids. Early on, she was drawn to her family’s sewing machine, though her three older sisters didn’t share her interest.

“I’ve always been the art person,” she says, noting she used to make her own clothing. Through her life, the hobby evolved.

“I’m actually a textile artist. So I worked for several years just on textiles, large wall hangings, fibers, some knitting (and) clothing-type things,” she says.

The Mackenzie High School graduate went on to earn her bachelor’s degree in education at the University of Michigan Ann Arbor and her master’s at Marygrove College in Detroit.

Teaching art wasn’t something she originally pursued. “I was thinking about going into therapy. I worked in dance therapy. I went to NYU’s graduate program for a year,” she says.

She ended up back in Detroit and taught science for a while at Parker Elementary-Middle School. While she’s only taught art at Thirkell, she sets an example for the importance of all subjects by working with fourth-, fifth- and sixth-graders on math in an after-school program there.

And it should come as no surprise that she says she’s “always letting the students know how much art and math are related.”

“I’m always talking to them about art as a career or different things that they need to know – stay on track making sure they’re working with their art, using those skills in their different classes, learning to focus (and) pay attention,” Rice says.

Rice brightens up her school with her inventive projects. A tall box statue emblazoned with a larger-than-life-sized photo of Thirkell’s principal, Dr. Carla Smith, greets those coming into the school’s front doors. Rice says Smith encourages her and gives her ideas, too.

“Everything that I do in here is mainly because of Dr. Smith. She has so much faith in her staff,” Rice says. “And (in) every single classroom, you’ll just see the creativity from the teachers – and she has a great love of the children.”

And as far as planning the projects and envisioning what the end result will be? “When God puts it in my head, I usually see it clearly, and then we just start working on it,” she says.

Teaching at Thirkell is truly a joy for Rice, who describes the school as “a wonderful place to be.”

“I’m happy to come into work every day,” she says. “People that can’t say that, I feel for them.”

When the kids move on from her class and embark on their journey up to different schools, there is another life lesson Rice wants her students to take with them.

“More than anything else, I hope they can learn that they can do anything. If they even try to say, ‘Ms. Rice, I can’t do this, I don’t know’ – that’s pretty much been taken out of their vocabularies. They know I don’t even put up with it,” she says. “You can do anything. You can do anything in the world. That’s what I want them to take from this – from my classroom.”