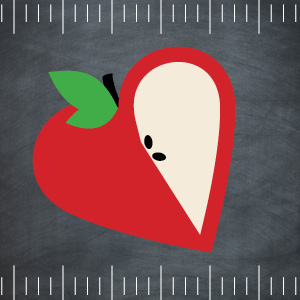 The praise poured in after we asked readers to submit nominations for the educators they thought should be recognized as one of Metro Parent's Top Teachers. It was heartening to see so many express their appreciation for the efforts of their kids' teachers. Thank you, readers! And thank you, Michigan teachers whose efforts often go unheralded.

Check out all the 2012 Top Teacher Nominations here!

After sifting through essay after heartfelt essay espousing the virtues of hundreds of local teachers, we narrowed it down to a final fabulous five. All of the teachers nominated were clearly special. You can see for yourself by browsing through all of the Top Teachers nominations.

But for Metro Parent, these five seemed particularly stellar. From constantly coming up with creative ways to teach complex subjects to taking the time to meet with students one-on-one, these men and women reminded us of the amazing impact one awesome teacher can have on the life of a child. We salute them.

For two weeks, James Fisher's fifth-grade classroom at Ferry Elementary in Grosse Pointe Woods went through a transformation: It became Fisher Island. Students brought in refrigerator boxes to craft storefronts out of their desks. Then they lined up their stores in rows to make streets – after all, they needed to make their city presentable when customers (eager second- and third-graders) came in to "buy" their wares. They developed their own currency and flag, and even wrote a constitution for their classroom oasis.

Patricia Guest, who teaches next door, couldn't help but notice the students' excitement about the endeavor, and something else: "I don't think they realized how hard they were working and how much they were learning."

Of the experience, and Fisher's teaching style, one of his students had this to say: "He really brings fun into teaching, and he's very energetic about what we're learning." This student, along with Fisher's entire class, decided to nominate him for the Top Teacher Award, explaining, "If any teacher deserves the Teacher of the Year award, it has to be Mr. Fisher. His love of teaching is astonishing and our love for him is unstoppable."

Fisher, a long-time teacher in the district but in his first year at Ferry, was surprised by his nomination – especially when he heard his entire talented and gifted class was involved. "I'm very fortunate to be working with a fine group of students. They're just like a big family."

Explaining his teaching style, Fisher says he looks at the standards that he's required to teach and then tries to think of creative ways for those concepts to come alive for his students. That's how Fisher Island came to be. The two-week project that culminated in creating an in-class town taught students complex economic and government principles, like supply and demand, all in the guise of a student-created and run island.

That formula – of brainstorming ways to teach concepts in an exciting way, introducing it to students and then letting them run with it – spills over into all of the topics Fisher teaches, from having the kids give themselves Shakespearean names during a literature unit to meeting them and their parents at a coffee shop to finish off a course on poetry with live readings of their work.

Students band together in Mr. Rodgers' class. Make that 'J-Rodge,' as teens affectionately call their favorite music teacher – who happens to keep 200-plus in line, literally.

When James Rodgers became the band teacher at Fraser High School in 2000, there were only 89 students playing. Today, the band's members top 200 students year to year. This school year, Rodgers has 226 students in the band, which not only performs at sports games, but also consistently wins accolades at area music competitions.

"There's just this energy about him," explains Roberta Parisi, who had three children in Rodgers' band over the years. "He can be fun with them, but at the same time, when it's time to get down to work, they respect him." Parisi notes that when her son, who's now in the U.S. Air Force and plays for its Honor Guard, comes home, "The first thing he wants to do is go back to the school and see 'J-Rodge.'"

April Fiedler, who works with Rodgers, understands students' devotion. When asked what sets him apart, she answered, "The biggest thing is that he cares for all the kids equally. He really wants to create opportunities for all of the students to participate in all aspects of the band program." Mr. Rodgers' music duties include a total of five different bands that have various practice schedules throughout the year, marching band among them. By having such a positive influence on so many students, Rodgers hasn't just helped lift the spirits of their school, Fiedler believes, but also the tight-knit Fraser community as a whole.

And just how does Rodgers keep students interested in hours of music practices? "I try to use enthusiasm and humor," admits Rodgers, who happens to be a Fraser alum, class of 1989. "It keeps me grounded and connected with the kids. I've got great kids to work with, and we have a good time together.

"We joke around, but it's all in the name of making good music." His style has a lot to do with helping kids perform their best and enjoy music, rather than seeing it as a chore. It's a lesson he says his father, also a musician, taught him growing up. "There's this excitement when you're performing music and it comes alive, the art of it, taking it beyond just notes and music, so that it really can move you – and those that are listening."

Middle school students in Mrs. DeVore's class know she has high expectations for them. But that's OK. This tough teacher is also their biggest booster, making them believe in themselves, too.

The common thread throughout the six nomination letters for Ann DeVore, a middle school teacher at the Dearborn Heights Montessori Center, was that she expected a lot from her students. "She's the toughest teacher these kids will ever have," noted Cheryl Miller, whose daughter was taught by Mrs. DeVore.

Miller goes on to say that DeVore helped her daughter gain confidence in her academic abilities not just through her teaching style, but also by teaching her daughter how to manage her time &nd
ash; and other practical skills that made learning and completing assignments easier.

Kay Neff, the head of the Dearborn Heights Montessori, who has known DeVore for almost 30 years, agrees, adding, "She teaches the student to be hardworking. I think she just has this profound understanding of adolescent kids where she's able to help them by walking that fine line between nurturing and pushing them to stand on their own."

In fact, Neff points out that DeVore was the driving force behind expanding the school to add seventh and eighth grades. "She is incredibly committed and basically created our middle school from scratch."

Part of helping kids excel for DeVore is figuring out what learning style works best for each individual. She gives as an example the hot lunch program, where students do everything from market research on which products to offer to answering "customer" complaints. "The money they earn pays for a school trip they take at the end of the year," says Mrs. DeVore. "I don't like it if they're just handed a bunch a money. It's important for them to understand the importance of earning their way."

When asked why she might have a reputation as a tough teacher, DeVore answers, "It's because I say 'no.' Or I'll say, 'Do it again.' Or, 'Is this your best work?' Most people don't do that anymore – they'll take whatever the kids turn in and the kids know that; they know when they're just sliding through. I like to ask them, 'What kind of education are you earning?' They know when they're doing their best. They're smarter than we are."

One mother worried that her son with special needs wouldn't fit in at school – or even want to go. But with Ms. Curtis as his teacher, her son can't wait to go to class.

Tonnies says it can be hard to see the developmental progress in her son, Carter. But last year, when Curtis worked with Carter, Tonnies noticed changes in his behavior – including that he loved going to school. "School is not always a good experience for kids on the spectrum."

When it comes to class time, Ms. Curtis says she tries to make learning meld seamlessly into activity. Learning letters might mean an afternoon on the swings, singing the alphabet over and over again. Or she might put words on the floor, so students can move on scooters from one to the next.

"I try to incorporate sensory experiences as much as possible," says Curtis, who followed in her father's footsteps. "My dad was a special ed teacher… and when I decided to be a teacher, my dad suggested giving special ed a try. When I took my first special education class (in college), I just fell in love with it."

Before and after school, Mrs. Del Pizzo, volunteers her time – whether it’s to help students develop a love or science or to meet one-on-one for tutoring in topics that might be difficult.

"She looks at each student as an individual," says Amy Conrad of Christina Del Pizzo, a second-grade teacher at St. Michael School in Livonia. "While I know that's the goal of every teacher, she's just able to do that well, even with 31 students in her class." Conrad knows from experience. When her son began acting up a bit in class, Mrs. Del Pizzo figured out that he just had extra energy and needed more of an academic challenge. "I feel so incredibly lucky that my son, Miles, has an educator who so wholly understands and respects him."

Other parents' letters echoed the same compassion that Mrs. Del Pizzo had toward their children. One father noted that this teacher stayed after school with his daughter to help her improve her reading skills (the tutoring sessions went on for the entire year), and another mother gushed that her second-grader says Mrs. Del Pizzo taught her to "think like an engineer."

"She's a very creative and enthusiastic teacher," explains Sister Carolyn Ratkowski, who is the school principal. When St. Michael's needed a teacher to step in to help run their A World in Motion program, which meets before school and involves teaching students engineering concepts and competitions, Mrs. Del Pizzo eagerly volunteered. "It's without pay," notes Ratkowski. "Just the dedication she has is amazing."

Now in her seventh year of teaching, Del Pizzo relished the chance to teach her second-graders science concepts through activities. One of those activities involved the kids crafting paper helicopters and tissue parachutes to get some hands-on experience learning about seed displacement. "The kids really embraced it, and it evolved into all these other projects," says Del Pizzo.

When asked about how she helps struggling students, Mrs. Del Pizzo had this to say: "'Struggling' is such a broad term. They're each little souls. I'm teaching these little souls, and they're so unique. They just have different views on the world. And if you sit down and listen to them, they have a lot to add to the class. I learn so much from these kids."