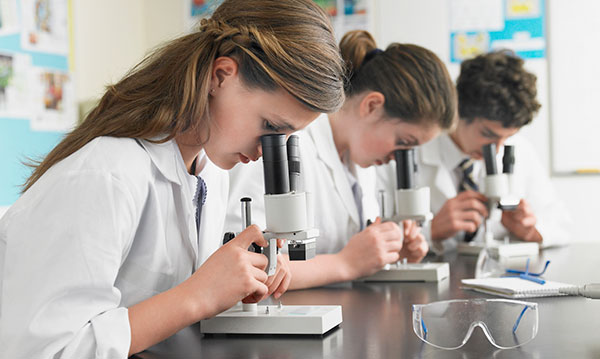 If you remember losing interest in science in middle school, you’re not alone. Research shows by eighth grade, nearly half of students have lost that science spark or say it’s irrelevant to their future education and plans.

Right here in our state, students haven’t fared well in science – at least according to the most recent M-STEP assessment data from spring 2015. The percentage of 11th graders tested who are proficient in science fell at 29 percent, while only 23 percent of seventh graders and a dismal 12 percent of fourth graders were considered proficient. Those levels aren’t wildly different from MEAP testing results in years prior to that.

Yet science will only become increasingly important in our country. In fact, the United States’ science, technology, engineering and math workforce is expected to grow. In 2011, the United States Department of Commerce Economics & Statistics Administration reported STEM jobs are estimated to grow by 17 percent from 2008 to 2018.

Here in the Mitten State, educators are making changes to help students better prepare for that future. In November 2015, the Michigan State Board of Education adopted new K-12 Michigan state standards for science. While these won’t be fully implemented until roughly 2020, parents might be curious how this shift in performance expectations will shake out in their kids’ classrooms and on the Michigan Student Test of Educational Progress standardized test (M-STEP) – primarily between 2017 and 2020. Metro Parent has your primer right here.

The new state standards are derived from the Next Generation Science Standards. Michigan was involved in developing the standards, which are based on National Research Council of the National Academies’ A Framework for K-12 Science Education.

“This will be the first time that Michigan has educational standards that are based on research on the best practices for engaging youth in science – as well as when kids learn what, and how they learn it,” explains Tracy D’Augustino, a Michigan State University Extension educator whose role is to help increase science literacy in the state.

So why now? The Michigan Department of Education notes it typically reviews and/or updates its standards every five to seven years, and the previous standards were adopted in 2006.

What makes it different?

For Framework, D’Augustino says, “The researchers really looked at the brain research that’s out there and said, ‘What can a kindergartner through second grader understand about atoms? What is their brain capability? And are we trying to push too much information in early when they really don’t have the capability?'”

There are three dimensions outlined by Framework:

The addition of engineering is exciting. “Previously Michigan didn’t have any engineering standards,” D’Augustino says. In fact, “engineering design” will now be a factor in every year of K-12 learning – and the sole focus in second grade.

Also, the crosscutting dimension is huge. There’s an emphasis on connecting the sciences and teaching kids how one subset of science impacts another. For example, she adds, how does making fertilizer have an impact on greenhouse gases? Or looking at energy in physical science – like force and motion, energy in chemical science and the flow of energy in the food chain.

“It does a much better job of looking at science as science, rather than isolating the science,” she says.

“The biggest change with the new standards is not what we’re teaching in science, for the most part. It’s really how we’re teaching it,” D’Augustino says. “It’s much more of the hands-on doing” – not so much reading a textbook, but using that textbook as a resource and exploring activities firsthand.

What might you notice in your kid’s classroom as the standards are implemented? “Hopefully (what) we’ll be seeing or hearing is a lot more stuff happening,” she says. “Kids may be talking about playing in science.”

If I throw a golf ball and a tennis ball in the sand, what happens? If put a tennis ball on top of a basketball and drop them together, what happens? “Helping kids to really connect the science theories that they’ll discover in their textbooks with what they just saw.”

In each grade level, here are the concepts K-12 students will learn. (Note: For a full breakdown of focuses in each category, visit the MDE’s guide.)

It’s important to note that these are performance expectations – not a curriculum. The standards give guidelines for what knowledge students should gain in each grade, but do not define classroom instruction, MDE notes.

“They don’t say, ‘You have to cover this in freshman science,'” D’Augustino says, adding, “Which is good. But it’s frustrating for some teachers and administrators, as well.” With the changes being rolled out gradually, it gives teachers time to learn and prepare. And, D’Augustino adds, most teachers she’s talked to are “pretty excited” about the shift overall.

When will it start?

Implementing the new standards will be done in phases.

“This first year, there’s going to be nothing that happens as far as the assessment changes,” D’Augustino says, referring to 2016.

Here in metro Detroit, Wayne RESA summarizes a tentative plans to gradually increase the percentage of new questions being added to the M-STEP in the years to come. The M-STEP will be fully aligned by the 2018-19 or 2019-20 school year, MDE notes on its FAQ page about the standards.

Need more information? Parents can find lots of details on the new Michigan science standards through the Michigan Department of Education’s helpful document, as well as on its Frequently Asked Questions page.

What are your thoughts on the new Michigan state standards for science? Do you think they’ll be helpful to students?