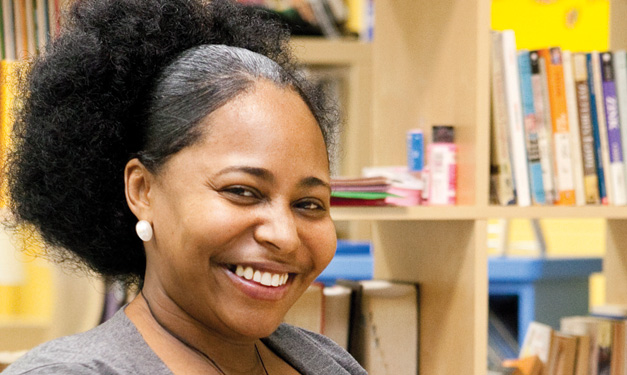 She stops kids she sees on her neighborhood streets, wondering why they're out and about during daylight hours on weekdays.

"There's nothing out here for you," Roquesha O'Neal tells them. "Your education is inside a school."

A fearless, tireless advocate for education, community organizer and volunteer, O'Neal is involved with a host of parent and school-related organizations where she hopes to help kids get educated and – down the road – make her community a better, safer, healthy place to live.

O'Neal is president of the Osborn Evergreen Academy parent group and a local community school organizer. She's also a board member of both the Osborn Neighborhood Alliance and Excellent Schools Detroit, where she rubs elbows with top education administrators, foundation officials and other community leaders.

But her real passion, the 38-year-old says, is kids. Hers. Her friends'. The ones she's watched grow up in the Osborn neighborhood on Detroit's east side where she's lived for six years.

She volunteers with several nonprofits because she says the best way to get or keep "her" kids off the streets, in schools, graduated and off to college is if the community pulls together. So O'Neal leads the way, starting with her own children's education and working with others, too.

"Since I cheated myself out of my education, I push my children to get the best education they can. That's why I'm an involved parent. I push. I help other parents to push. I push. We've all got to push together to get quality education."

Raised during the early part of her childhood in the Osborn area, O'Neal then moved and went to Detroit's Southeastern High School.

"High school was very hard. So many bullies and gangs," she says.

Blaming "peer pressure and my own hard-headedness," O'Neal dropped out. She worked at a grocery store and pharmacy. She had her first child at 19; two more three and eight years later.

She always met their teachers, showed up for conferences and helped as much as she could with homework, but her own lack of education, she admits, limited her.

Still, from time to time, she'd take a GED class, pushing through the writing section, which was the hardest for her. She recently took the test and is awaiting results.

Knowing firsthand the limits of no education, O'Neal is determined to keep her kids – and the neighborhood kids – in high school.

She does a lot of that watching from the Parent Resource Center at the Osborn building, which houses the Osborn College Preparatory Academy, Osborn Collegiate Academy of Mathematics, Science and Technology and Osborn Evergreen Academy of Design and Alternative Energy.

"I think she was already somebody that was a very concerned, diligent parent," he says. "She felt she became empowered by the opportunity to have a spot inside the school."

"Parent involvement is shown to be a research-based way to improve education outcomes," he says. "For her, that means not just for her own kids, but she helps spur on other parents to action."

The setting for much of that, the Parent Resource Center is painted in bright colors and filled with books, computers and fliers with info ranging from helping kids find safe routes to school to tips on getting scholarships.

"I never knew nothing about a parent room in a school until I came to Osborn," O'Neal says. "But the learning turned into passion, the passion turned into desire, desire turned into where I'm at today. … It was like waking up to a first cup of coffee."

Several dozen parents are regulars at the center, most coming on Mondays. "Some stay five minutes; some stay all day." They attend workshops, meet, plan events and talk about their kids, with O'Neal often at the helm.

At least four days a week, O'Neal walks or catches a ride from her home nine blocks away to the school where her eldest child is a senior. Her neighbor Shoniqua Kemp, another parent liaison volunteer, sometimes drives her.

O'Neal used her less-than-subtle recruiting flair to bring Kemp into the network. "She said, 'I need you to come out. We need help in these schools,'" Kemp recalls. "I was already into the schools, but not to this extreme." O'Neal helped Kemp find a house for herself and her three kids across the street. Then she drew her in.

"She made it look easy," Kemp says of O'Neal. Now, Kemp too is a center mentor, on the Osborn neighborhood board and involved with Excellent Schools Detroit.

"There are so many different things that happen in the community that step into our schools because of so many issues," Kemp says, citing poverty, gangs, convicted sex offenders, a high rate of children in foster care, homelessness and the housing crisis. It all impacts kids' behavior.

"The thought is if the child standing next to my child fails, then we all fail (in) this community," Kemp says. But she, O'Neal and other parents are working to help.

In June, O'Neal's son, Dequan, graduates. He's hoping to head to Grand Valley State University. He's why mom is so involved. But at first, it was for a different reason.

Dequan was walking in the neighborhood when some teenage boys attacked him in what O'Neal suspects was a gang initiation. "My son called me and told me what happened. I said, 'Go home, calm down. I'll handle it,'" she says.

O'Neal marched over to the house where one of the boys lived. She knew his father, who promised her son would be left alone. Three years later, he has been.

Her next stop: school. "The principal told me I had to be careful because my son got initiated," she recalls. "When he told me that,
I started watching. And I went to the school and talked to all the male teachers at the school, letting them know that I was a single mother and that I needed help to keep him focused."

One of the teachers suggested a neighborhood service organization after-school program that would teach Dequan advocacy, how to speak up, even how to tie a tie.

"He's been involved ever since," O'Neal says. "It changed his life." He's since appeared in national news reports about Detroit's bankruptcy and plans a career as a civil rights lawyer or a businessman.

O'Neal's two younger kids attend Center Line schools. Her daughter, 15, plans a career as a chef and expects to join the army. Her 10-year-old is ADHD, but O'Neal says recognizing his needs is the first step to assisting him.

"Once you get the proper help, then you can catch it early."

The neighborhood has been key in raising her kids, she adds.

For 10 years, O'Neal has organized and volunteered with an unofficial babysitting program. Fifteen families led by single moms have been part of the effort, watching children while their own parents are job hunting or working.

That same community spirit applies to school involvement, too.

"It means coming to parent-teacher conferences. It means coming during school visits, popping up whenever you get the free time. We need you. We need parents in the schools."