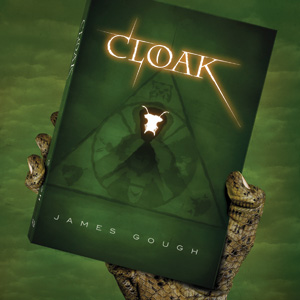 In his debut novel Cloak, Ohio writer and former Detroiter James Gough thrusts readers into a never-before-seen world full of half-humans/half-animals who have been living undercover among us for centuries. That is, until a young boy discovers his unique ability to see through their clever disguise.

Thirteen-year-old Will Tuttle of Brooklyn has suffered from severe allergies since birth, yet no doctor knows why. Stuck in a world of rubber sheets, plastic-covered pillows and endless allergy medications, Will knows nothing outside of his allergy-proof bubble and gurgling humidifier.

Determined to escape his helpless life of solitude, Will decides to slice open his bubble and venture out into New York City, where he is finally able to identify the bizarre source of his allergies: half-human creatures called enchants.

But his capability to see enchants makes Will a target. Plunged into a life of run-ins with a wolf-man assailant, stampeding carnivores and other wild creatures, Will needs assistance and protection. He is assigned a group of enchanted bodyguards to help him blend into the secret society, but he's not the only one in danger. Will finds out about an evil plot that threatens the existence of his new and only friends, forcing him to step up and overcome his own fears.

This fantastical, adventure-filled novel revolves around seeing the world differently and sends the message that it's OK to be different. The book, released in November 2011 by WiDo Publishing, is aimed at young adults and plays off legends of talking animals that have circulated for generations.

Gough's Cloak is available anywhere books are sold, for the Kindle and Nook, as well as online at WiDo Publishing, Amazon.com, Barnes and Noble and Celery Tree.