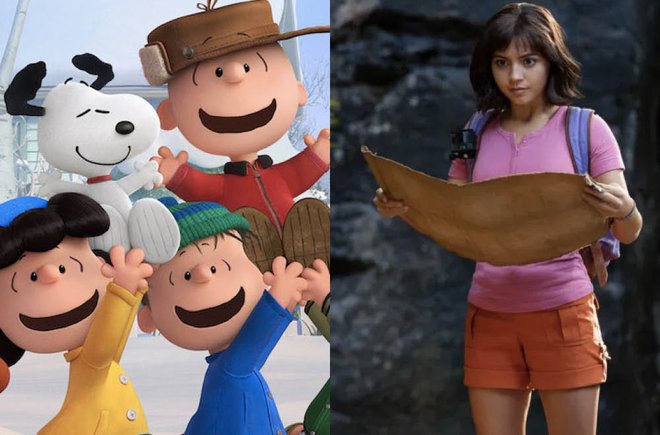 We all need a break! Get comfy on the couch and indulge in a little TV therapy with your kids. These streaming services are serving up some quality family content this month. Here are some shows and movies to add to your watch list.

This ’90s remake of Dennis the Menace shows the best and worst of kids. A classic “disgruntled neighbor versus high spirited kid” comedy will have parents laughing over how sympathetic they’ve become to the neighbor.

Jurassic Park is a classic adventure story that has gone on to inspire theme parks, remakes, and a continued fascination with dinosaurs. This suspenseful sci-fi film shows scientific discovery and whole lot of bravery.

Kids will finally know the ’80s movie that inspired Dustin’s hit song in Stranger Things 3. This book inspired film combines fantasy with adventure and will have audiences reading with a bit more intention.

This live-action modern take on Dora the Explorer is both funny and nostalgic. While poking fun at itself, the film shows the spirit of adventure while answering the question most viewers have had since they were kids, “what will Dora do when she gets older?”

The Peanuts Movie is a reimagination of the popular comics by Charles M. Schulz. With familiar voices such as Noah Schnapp (Will from Stranger Things) and Kristin Chenoweth (Wicked), the story follows Charlie Brown and his new neighbor.

Based on the life of P.T. Barnum, this modern-musical shows kids and adults alike that a million dreams are hardly too many. Teaching kids that being yourself is always the best options while reminding adults that nothing can get in the way of what’s important, this film has something for everyone.

Based on the best-selling book by Katherine Applegate, the story follows a gorilla and elephant in captivity. Not only are the characters endearing, but it also shows an important lesson about how to treat animals meant to be in the wild.

This post was originally published in May 2020 and is updated regularly.