If you and your family have seen the tree-lighting and ice skating at New York’s Rockefeller Center and wondered, “Why doesn’t Detroit have something like that?” you clearly haven’t been to The Rink at Campus Martius Park!

This magnet traditionally opens shop for family ice skating starting by mid-November, when the city of Detroit officially lights up its own 60-foot holiday evergreen, set atop the Woodward Fountain.

“Campus Martius Park has become the heart of downtown Detroit,” says Detroit 300 Conservancy president Robert Gregory. “The Christmas tree and the rink are the center of activity in the city. Anyone can come skate and enjoy the city. It’s a family place.”

While Campus Martius was still in development, Detroit 300 adopted it and funded its construction. Today, the conservancy runs both the park and its programs, drawing more than 2 million visitors a year.

Detroit’s Campus Martius originated in the early 1800s, but with the advent of the automobile, it gradually fell out of use. The park found new life in November of 2004.

Since then, it’s earned acclaim as the first-ever winner of the Urban Land Institute’s Amanda Burden Urban Open Space Award. The award recognizes an outstanding example of a public open space that helps transform the surrounding community. Campus Martius was in competition with parks in New York, Seattle, Pittsburgh and other cities throughout the country.

“The ice rink has become a regional destination,” Gregory says. “People come from all over. It’s one of my favorite things because it brings so many people of all ages together. It’s truly a great scene and a fun experience outdoors.”

While people skate around the rink, music fills the air, and colorful, twinkling lights help make it a magical place for kids. It’s open daily. There’s a reasonable entry fee, and skate rental is only about $3 more.

If you’re hungry, the nearby Campus Martius Fountain Bistro is great for both dining in and carryout. There, you’ll also find birthday parties for kids. Ice skating admission is included. Just be sure to book before early March, when the rink closes again until winter.

The Rink at Campus Martius Park 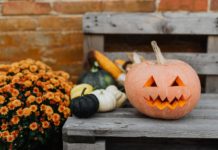