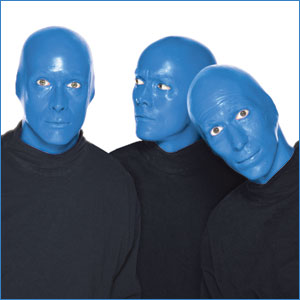 A trio of blue men is taking over Detroit. That's right – the Blue Man Group is coming to the Fisher Theatre in Detroit May 1-13, 2012.

With its blend of tunes, funny business and tech, this popular show is unlike anything you've ever experienced. The guys never utter a word but this blue crew will find tons of ways to keep you entertained during the show.

Founded by Chris Wink, Matt Goldman and Phil Stanton in 1987, this group not only performs theatrical shows and concerts; they've recorded music for television and films, made TV appearances and more.

They've found other ways to give back to children, too, with their Invent an Instrument National Program – designed to inspire kids to create music in a new way.

Part of the trio's appeal – aside from their bold blueness and action-packed shows – is that their performance crosses all language borders. Since they never speak, it doesn't matter which country they are performing in. The music, comedy and theatrics of the production are easy to understand – whether they're in the United State or China.

So don't miss your chance to see the show! Tickets range in price from $45 to $125. The show runs 1 hour and 40 minutes – without an intermission – and is suitable for ages 5 and up. Performance times are as follows:

See the Metro Parent listing for more on the Blue Man Group at the Fisher Theatre in Detroit.