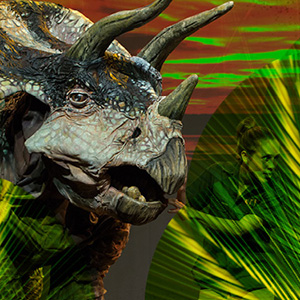 Crikey! Curious about what sorts of creatures stomped around Australia millions of years ago? Or, if you say "dinosaurs," do your kids instantly perk up? Either way, you'll want to grab tickets to a larger-than-life show heading to southeast Michigan.

Dinosaur Zoo Live plays the Fisher Theatre in Detroit March 12-16, 2014. This innovative, interactive stage spectacle features an array of jaw-dropping prehistoric creatures, both jumbo and pint-size – which all come to life with help from some very talented puppeteers.

In an entertaining family performance, your tykes see an array of insects, mammalian critters and big ol' dinosaurs. A few highlights, according to Erth's official site, include Dryosaur, a "sweetly curious" baby dino, the "peaceful hulk" Titanosaur and, naturally, that "teeth-gnashing" T-rex. All told, you'll spot 16 of these monsters!

And it's all sneakily educational, too. The beasts you'll watch actually roamed the southern hemisphere millions of years ago. In fact, the show creator – Erth, a company that's been making this sort of magic for over 21 years – consulted with top-notch paleontologists to create the casts. That means these dinosaurs are based on scientists' latest and greatest fossil interpretations.

Ticket prices for Dinosaur Zoo Live range $29-$49. The show is suitable for ages 3-plus and runs about 50 minutes. But be sure to stay afterward! One of the big dinos comes out on stage, and families are invited to hop over and see it up-close, Fisher's press team tells Metro Parent. Plus, three baby dinosaurs stroll out to the lobby to meet curious kids – so prepare for some great photo ops.

There are seven total show times:

For the basic details on Dinosaur Zoo Live at the Fisher Theatre in Detroit, swing by the Metro Parent listing.