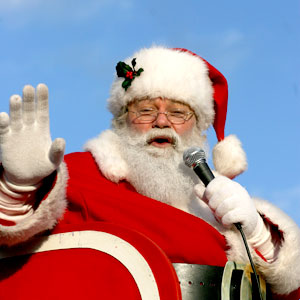 The Hometown Christmas Parade in Rochester celebrates its 60th anniversary this year with a tribute to its past. This year's theme is "Six Decades of Christmas Joy," and each float will represent Christmas during a specific decade in the past 60 years. What specifically will be featured in each float? They’re keeping it top secret, so you’ll have to show up or tune in to find out.

Nearly 100,000 people will line Main Street as 37 floats travel down the road, along with nine marching bands, nine drill teams, Cub Scouts, clowns, Santa Claus and more. Local businessman Russ Shelton, president and CEO of Shelton Buick GMC, and his wife Kathy, one of the founding members of the Rochester Women’s Fund, will be this year's Grand Marshalls. The parade will be broadcast live on WXYZ-TV Channel 7, as well.

The day's festivities begin early with a pancake breakfast (8 a.m.-1 p.m.) at the Older Persons' Commission, located at 650 Letica Drive. The cost is $6 for adults and $3 for children. Kids can also meet with Santa from 11:30 a.m.-1:45 p.m. near the downtown area before the onset of the parade. Live entertainment on two stages, provided by Stoney Creek Studios Inc. will also take place from noon-1:45 p.m.

Once the main event has ended, head over to the Rochester Community House to purchase hot dogs, cookies, doughnuts, hot cocoa, coffee and more. And if you missed Santa before the parade, meet with him at Bordine Nursery from 4:30-5:30 p.m.

There will be a free shuttle service to and from the downtown area, between 12:30 and 4:30 p.m. Pick up is at Chase Bank, located at 1290 Walton Blvd. and drop off is at another Chase Bank branch, located at Pine and Fourth streets.

See the Metro Parent listing for more on the 2011 Hometown Christmas Parade in Rochester.