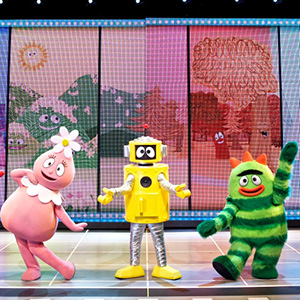 Don't worry: These monsters don't bite. Join DJ Lance Rock and all the friendly toy monsters of Yo Gabba Gabba as they hit the stage in their fifth anniversary stage tour, called Yo Gabba Gabba! LIVE! Music is Awesome! It appears Oct. 22, 2014 at the Fox Theatre.

Yo Gabba Gabba is a live-action TV series that follows the adventures of DJ Lance Rock and five monsters that come to life when they hear the words "Yo Gabba Gabba." The live version features the cast of the TV series, along with fan-favorite Leslie Hall and beat-boxing legend Biz Markie.

This state-of-the-art show, brought to life by the series' creators, Christian Jacobs and Scott Schultz, features music, dancing and animation, along with songs from the tube version, like "Party in My Tummy" – as well as all-new favorites that remind us, "don't bite your friends."

The show's goal? "To inspire the next generation of music lovers," the co-creators say in a press release. "Taking your kids to see Yo Gabba Gabba! LIVE! is like taking them to see their first rock concert."

Tickets range from $23 to $41 and are on sale at the Fox Theatre and Joe Louis Arena box offices, Hockeytown Authentics in Troy, all Ticketmaster locations and online.

For more information on the 2014 Yo Gabba Gabba! LIVE! Music is Awesome! at the Fox Theatre in Detroit, see the Metro Parent calendar listing.