From the September 2018 magazine 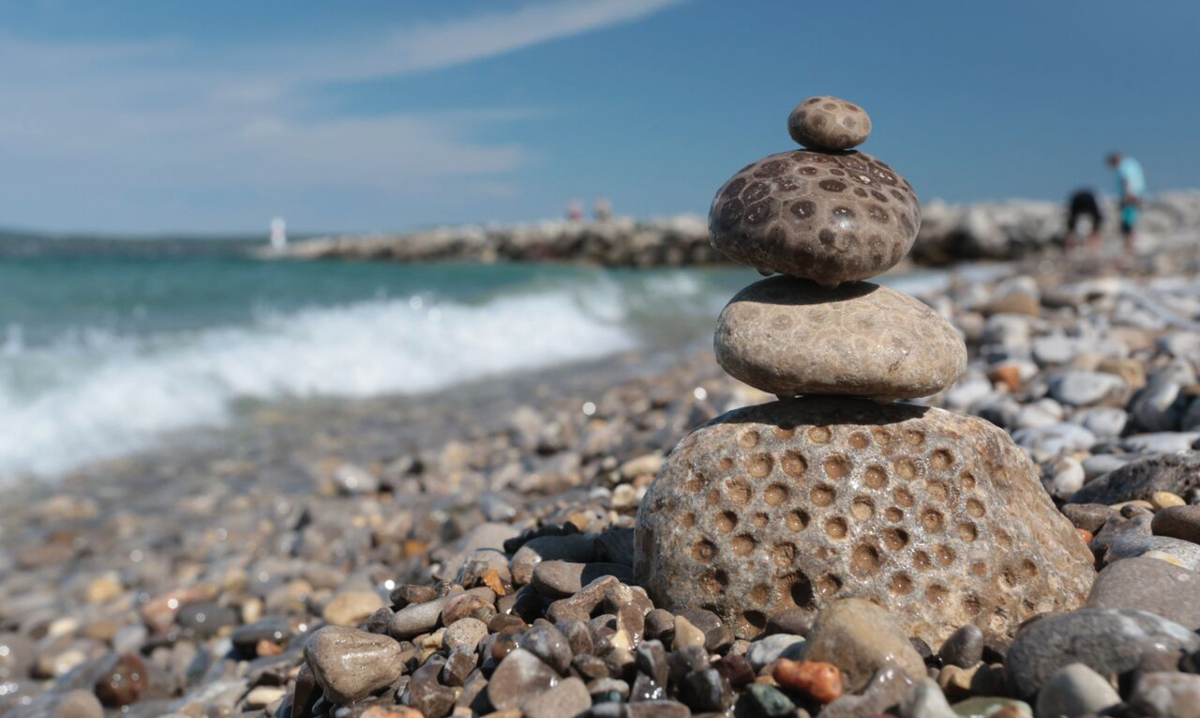 If your kid is into geology then they’ll totally dig Collect Rocks Day on Sept. 16 – but don’t just scour for stones in any old spot. Look for cool collectible geodes at these spots along Lake Huron, Petoskey and in the U.P.

Do More Than Skip Rocks on Lake Huron

Coated with its characteristic hexagonal pattern, the Petoskey stone has become a sought-after find along Michigan’s beaches. Yet Michigan’s designated state stone is more than it appears to be: Millions of years in the making, Petoskey stones are actually fossilized pieces of coral.

While there are several places in the state to find them, make a trek to Lakeport State Park, about an hour northeast of Detroit, to spend the day – and maybe a night or two – and venture to the beach to see what stones you can find.

“The biggest draw here is definitely the beach,” says Robert Noble, the lead ranger at Lakeport. “I see families all the time camp here and spend their day at the beach, looking over the rocks and then the kids take home their favorites.”

For newcomers, Noble offers this advice: “In my experience the beach north of the campsites is better for rock collecting than the south area, which tends to have more sand.” There are two beach areas – one mile-long stretch close to the campsites and another half-mile one across a pedestrian bridge. Both have good spots for eyeing Petoskey and other stones and fossils.

Lakeport State Park
There are plenty of camping spots at this state park right along the coast. Camping rates range from $30 to $34, more if you rent a cabin. Recreation Passports are also required, which cost $11-$16 for Michigan residents (it’s good for the year and gets you into all state parks and recreation areas).

“I just love that kids have an inherent love of rocks,” explains Jeff Lockridge, professor of earth science at North Central Michigan College and frequent rock sleuth around Petoskey and Little Traverse Bay. The dad of two recommends going knee-deep just past the shoreline and digging up a handful of rocks to check for Petoskey stones. “They’re easier to spot when they’re wet,” notes Lockridge, whose 6-year-old daughter is an avid rock collector.

“Explain to the kids that when they’re on the beach it may seem peaceful and relaxing but the beach is actually a very active place.” For example, the dunes at Petoskey State Park were created from sand blown off the beach and formed into cones, filled over time before settling into place. And those pebble-like Petoskey stones? Those have been smoothed from years of being pushed and rolled by Lake Michigan’s waves.

Rock Out With Fellow Rock Collectors

Each year, the Muskallonge Lake State Park hosts an annual Agate Festival. This year, the event is taking place 10 a.m.-5 p.m. Sept. 8 and 9 at the park, which is threaded between the banks of Lake Superior and Muskallonge Lake in the Upper Peninsula. As part of the event, visitors will see rock cutting and polishing demonstrations, plus have the chance to purchase items from vendors and see various agate collections. .

Looking for other family-friendly fun near or far? Check out our complete list of things to do and places to go in the Metro Parent calendar.