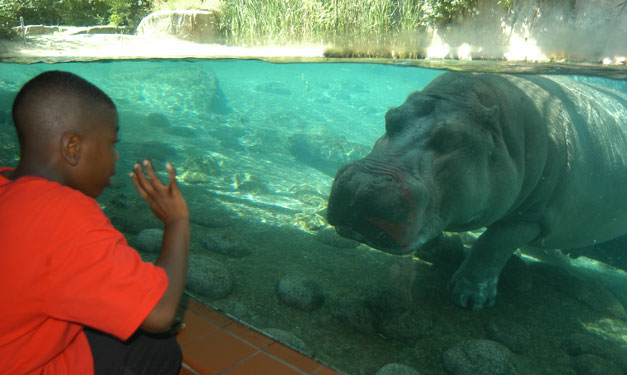 Long before the Michigan and Ohio State were feuding football teams, the states waged war over some land that became Ohio territory. That set the tone for a rocky relationship. But we say it’s time to put the feuding aside!

Pack up the kids and leave the maize and blue behind for a few days (it’s a short drive from metro Detroit) in Buckeye country. After getting a taste of Toledo ourselves, we promise: A weekend of fun awaits parents and children alike.

Let’s take a closer look at some of the family fun venues this city has to offer – from hands-on fun to art museums and, of course, the Toledo Zoo.

Located in the heart of downtown Toledo, the Imagination Station is a two-story interactive experience that teaches kids about motion, gravity and more.

Want to ride a bike 20 feet in the air? Consider it done! The High Wire Cycle is one of the museum’s iconic exhibits, specially designed for the building with a bicycle that is suspended 20 feet off the ground on a two-inch cable. No fall hazard here: Start peddling, and the 275-pound counterweight assures you defy gravity every time.

The Little Kidspace, appropriate for kindergarten kids and younger, shows them what happens in a hospital and lets them shop in the grocery store and climb a tree house while learning about motion, math and science.

Relive your college years without the keg (you’re parents now!) in the Distorted Gravity Room, where what you see and what you feel are two very different things.

The Bodies Revealed exhibit, which has also visited Detroit and features 10 full body specimens and over 150 organs, is on exhibit until Sept. 18, 2011.

“Each of the specimens (is) real. They actually remove all of the water, and it is replaced with silicone,” says Anna Kolin, the public relations and communications manager at the Imagination Station.

While the exhibit is appropriate for ages 13-plus, Kolin notes that parents can escort younger children through it at their discretion. It’s a wonderful learning tool, showing things like the comparison of a smoker’s lung vs. a non-smoker’s lung.

With 9,000 mammals, fish, reptiles, amphibians, birds and invertebrates, the Toledo Zoo has been a local landmark attracting people from Ohio and neighboring states for decades.

It houses species from around the world in its reptile house, aquarium and arctic encounter, to name a few. Plus, there is an amphitheater for concerts and performances.

The year-round children’s zoo, Nature’s Neighborhood, gives the younger kids the chance to explore through interactive play and workshops.

Watch feeding demos or help feed a giraffe at the zoo. Times vary, so be sure to call ahead for details and registration.

Meet the zoo’s newest addition: Baby Lucas, the adorable baby elephant that was born in June of 2011. Lucas is 300-plus-pounds of cuteness and watching him interact with mom, Renee, is oh-so-adorable.

The Zoo is open daily with the exception of Thanksgiving, Christmas and New Year’s Day. Admission is $11/adults, $8/ages 2-11 and seniors, and free/ages 2 and under. There is a $6 parking fee per car, as well.

Venture to the outskirts of Toledo on the historic west end for an art education at the Toledo Museum of Art, which is home to more than 30,000 works in 35 galleries.

From van Gogh to Monet to Degas and El Greco, introduce your kids to art from around the world. The museum offers free hands-on activities, such as constructing a mummy out of clay, along with free glass-blowing demonstrations in the Glass Pavilion.

The Glass Pavilion opened in 2006 and according to Cathy Miller, director to tourism at Destination Toledo Convention & Visitors Bureau, “The Libbey family (owners of Libbey Glass and founders of the museum) always collected glass art work – but the museum caused the glass pieces to start deteriorating. As a result, they decided to construct the glass pavilion. They commissioned a company from China to construct it – specially designed to house glass, keeps sun and humidity out.”

And admission is free!

Ah, baseball games, how we love thee – and, from April till September, the Toledo Mud Hens Minor League team bats away at the Fifth Third Field House.

Single tickets to the game range from $7 to $9.

A stop in Toledo would not be complete without a visit to Tony Packos!

Ohio-born actor and M*A*S*H star Jamie Farr put this Hungarian-style restaurant on the map, which is known for its hot dogs, pickles, peppers and buns.

Burt Reynolds was the first to sign a hot dog bun after dining at the restaurant, and now there are hundreds of framed buns signed by the likes of Bill Cosby, Pat Benatar and more. 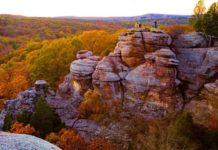 Socially-Distant Midwest Destinations to Visit with Your Family