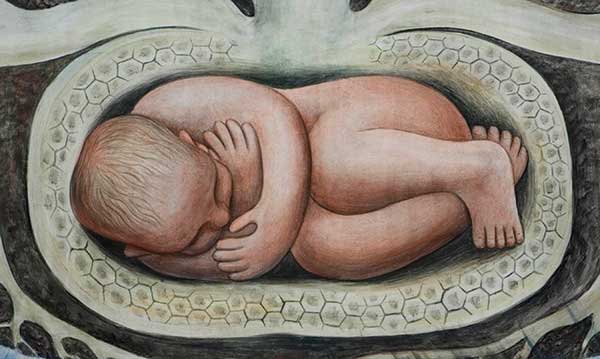 Diego Rivera. DIA. The famous Mexican artist and Detroit Institute of Arts are like two peas in a pod – thanks to Rivera’s towering Detroit Industry murals that dominate one of our most popular Detroit museums. And now, the DIA is hosting an exclusive exhibit called Diego Rivera and Frida Kahlo in Detroit. It brings together 38 pieces of his work – alongside 26 works by his wife Frida Kahlo, who was an equal talent and creative spitfire.

The exhibit centers on the year the couple spent in the city – April 1932 till March 1933. That’s when Rivera created his giant 27-panel frescos. His sketches for that are on display, along with work by the pair before, during and after their time here.

Audio tours are available for adults and kids ages 9-plus, in English and Spanish. That’s a good guide for age-appropriateness for this exhibit, too: Roughly grades 3-4 and older. But check out details on the DIA website in advance and use your discretion. There is a bit of subject that matter could be difficult for younger kids. Namely, three of Kahlo’s paintings depict violence, suicide and pregnancy loss.

That said, “Kahlo’s work is very small in size and are in rooms with plenty of other gorgeous, family-friendly things to look at,” DIA interpretive planner Megan DiRienzo tells Metro Parent. “We have maps throughout the exhibition that will let visitors know where the difficult imagery is located.”

The DIA also hosts a variety of lectures and music events in tandem with the exhibit. One kid-awesome choice? Demos by the Matrix Puppet Theatre of Detroit. They’ll be creating an 8-foot-tall Diego Rivera walking puppet June 23-28!

While entry to the Detroit Institute of Arts is free for residents of Wayne, Oakland and Macomb counties, there is an entry fee for this special exhibit. During Tuesdays-Fridays, admission is $14/adults and $9/ages 6-17. On Saturdays-Sundays, the weekend rates go up to $19/adults (still $9 for kids).

To find out more about Diego Rivera and Frida Kahlo in Detroit at the Detroit Institute of Arts – and more metro Detroit events – check out the Metro Parent calendar.