September is here, which means fall is officially around the corner. And what better way to celebrate the incoming season than with a trip to an apple orchard – and these three options in Michigan, Indiana and Georgia are must-stops.

Take a look at the details on each one, grab a sweater and enjoy a day full of apple-picking, delicious donuts and other seasonal fall fun.

When asked her favorite variety of apple, Mary Grover answers without even thinking, “Jonagold. I like their sweet, tart taste.”

She knows a thing or two about apples. As the mother of William Grover – owner of Apple Charlie’s, a 75-acre property dotted with orchards in New Boston – she’s been in the apple business for years.

Family owned and operated, Apple Charlie’s has several varieties of apples available during the growing season for visitors to come and pick.

“The season starts out with Gala, McIntosh and Jonathan, and then it goes into Honeycrisp apples,” explains Grover. “Those are a hot item, Honeycrisps. They go really quickly. After that, we start having Red and Yellow Delicious, Mutsu, Empire and Jonagold.”

Grover encourages visitors to call Apple Charlie’s to find out what varieties are ready for picking before you go.

Besides apple picking, there’s plenty to see as you walk around Apple Charlie’s – like the pond and animals, such as goats, rabbits, alpacas and even an ostrich.

On weekends, Apple Charlie’s has live entertainment and grilled fare, including hamburgers and hot dogs. Other activities vary and may include bounce houses and pony rides. They also have regular hayrides.

Another not-to-miss treat? Piping hot doughnuts. They come in two varieties – plain or cinnamon and sugar.

When asked her choice, Grover answers slyly, “Hot cinnamon and sugar. But you can’t get them hot. When they’re hot it makes the sugar melt and disappear. You really can’t put the cinnamon and sugar on them until they’re cool.”

A Day Trip: Celebrate the Season

Apple picking is cause for celebration at The Apple Works in Trafalgar, Indiana, about a 45-minute drive south of Indianapolis.

The Apple Works offers more than 50 (yes, 50!) varieties of apples, many you may not have heard of before – like Golden Russet, GoldRush, Crimson Crisp and more.

“Generations of families visit The Apple Works each fall for apples, apple desserts, pumpkins and to enjoy the day at this beautiful orchard,” says Kenneth Kosky, director of tourism for Festival Country Indiana.

Don’t be shy about asking for apple recommendations. At The Apple Works, they love introducing visitors to new varieties. And yes, they offer apple tastings – and fudge samples, too!

Make the most of your visit by going during one of their themed weekends, like Holy Moly Honey Crisps over Labor Day or, at the end of September, the Highland Festival (feel free to wear a kilt).

Other family activities include train rides for kids, a giant slide and a petting zoo.

Even Father Away: Apple Adventures

Located in the North Georgia Mountains in the Blue Ridge area, Mercier Orchards puts a new spin on apple picking.

The 75-year-old family-owned and -operated orchard amps up the agritainment factor. Along with U-pick apples, for example, there’s an Adventure Course for families to go through with their kids – think climbing over walls, watering apples, puzzles and a trip or two through the mud in the 13-obstacle course. 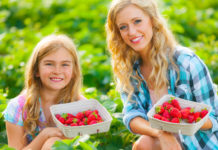