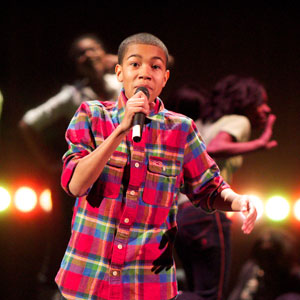 Get ready to rock, pop and soul as the Mosaic Singers bring Singsation – their annual wide-ranging array of music – to the Detroit Film Theater inside the Detroit Institute of Arts March 2-4, 2012.

The group of more than 80 young artists will open the show with their signature classical and spiritual music, then rock out to hits from the '60s through '80s after a brief intermission. The show, marking the group's 20th season, will feature pop favorites by Tina Turner, Michael and Janet Jackson, Aretha Franklin and Queen.

Part of the Mosaic Youth Theater of Detroit, the internationally acclaimed Mosaic Singers have performed in over 25 states, as well as at the White House. They combine song and dance with live accompaniment for a powerful performance that has something for everyone.

The younger set may have a hard time sitting through the entire performance, so it's best to leave tots with a sitter. Shows are at 8 p.m. Friday-Saturday and 4 p.m. Sunday. Tickets run $12 to $30.

Check out the Metro Parent listing for ticket costs and more information on the 2012 Mosaic Singers Singation in Detroit.