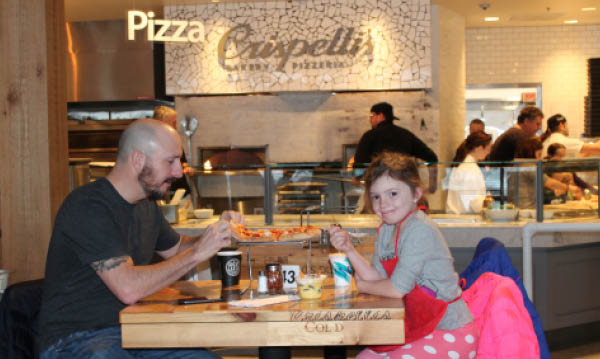 “We were trying to do something that would be fun with kids in the area,” says Kelly Willson, Crispelli’s catering coordinator here (there’s another in Berkley). So, back in September, they teamed up with West Bloomfield’s parks and rec department. And now, after a hit inaugural series, the winter course of Cookin’ at Crispelli’s will be served up on Feb. 20, March 19 and April 16.

How’s it work? Parent-child pairs get into the restaurant before it opens and receive an apron – and a tour. Then, kids join baker Kim Vallieo to learn how to make a special dessert, like chocolate chip cookie snowmen or parfaits. Next, they head back to the kitchen to whip up some pies with the pizza makers.

“One time a kid made a heart-shaped pizza, which was cool and creative,” recreation programmer Ashley Stokes says. Once pizzas are topped and chefs pop them in the oven, kids and parents decorate pre-made desserts in the dining area. Finally, when the pizzas are done, everyone feasts together.

So far the classes, which require registration, have quickly hit the 30-person limit and have drawn both repeats and newbies.

“We love being part of the community and seeing the little ones come in,” Willson says. “I can’t express how fun it is.”

All about the class