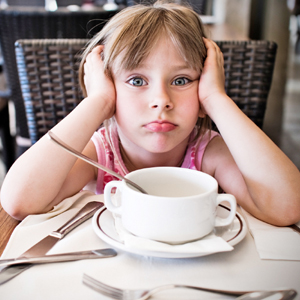 It's long been known that children who frequently eat fast food are likely to head down a path towards being overweight or obese. Pediatric health experts have warned, time and time again, that these food and drink options have too many calories and too much sugar for kids' daily needs.

But a new study from the Archives of Pediatrics & Adolescent Medicine is now extending these warnings to include all restaurants, including full-service, sit-down establishments – spots that may not seem "as bad" to parents.

In the study, researchers found that replacing a homemade meal with a fast food one increased caloric intake by about 126 calories for 2-11 year-olds. The tally was 309 calories among 12-19-year-olds. And dining at full-service restaurants? They found it was almost as bad, if not worse – with an extra 160 calories for younger children and 267 calories for older kids.

Kids who eat at both sit-down and fast food restaurants also drink significantly more soda, which is a major contributor to caloric and sugar intake. A small cola at a popular fast food chain contains around 150 calories and up to 40 grams of sugar. That's not even considering free refills.

The study found that among adolescents, increased soda intake was twice as large when the fast food was consumed at the restaurant than when it was when taken back home – a clear result, it appears, of those widely available free refill stations.

Dining out is easy

While some of these findings seem obvious, many parents can still fall into the habit of feeding kids fast food or restaurant meals out of convenience – and a perception that they are saving money.

Silvia Veri, nutrition supervisor at Beaumont Health System Weight Control Center, based in Royal Oak, Mich., says that eating out at restaurants is often a result of busy schedules.

"It can be appealing for busy parents to eat out to save on time," she says. "Also, some parents just enjoy eating out, so, in some ways, they've taught their kids to like the same things.

"Fast food, I would say, should be (a) 'sometime' thing," Veri continues. "It shouldn't become routine or an everyday thing."

In regards to sit-down restaurants, Veri recommends going out only one or two nights a week, max.

"Try to eat it in," she says. "You can still eat well on a very good budget just by making simple meals."

When a family does eat out, Veri recommends letting children be more aware of the calories they consume by using resources like Calorie King, a calorie counter that includes popular southeast Michigan restaurant chains and other food sources (from Subway and Trader Joe's to Applebee's, Pizza Hut and McDonald's).

"Use it as a guideline. It can empower kids to make a better choice by looking up the calories themselves to see what they would like to eat."

Veri tells parents to explore healthier options for sides when they go to restaurants, too. "Though these replacements may decrease the portions of protein … at least (kids are) filling up with something healthy."