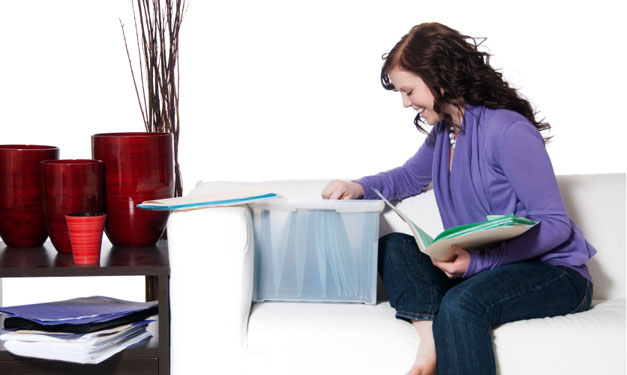 For many parents, tidying up the house is a daunting task. But even if you’re up to your eyeballs in toys, paperwork and kids’ stuff, turning the tide isn’t impossible – with solid tips for getting your home organized.

Boiling it down to the basics helps. Sure, you could go full-on KonMari on your clutter and tackle all your family’s possessions. But if you’re looking for a little sage and simple advice, you’ve come to the right place.

Metro Parent picked the brains of three Michigan-based professional organizers (and moms!) for their top tips for getting your home organized and insight on managing your family’s stuff – in the most sustainable ways possible.

Assess and be realistic

The parents who turn to Simply Organized Life in the Ann Arbor area are usually grappling with chaotic kitchens, messy play areas and unruly basements.

“This is the biggest mistake most people do,” she says. “They go to the nearest big box store and they buy a bunch of bins and boxes. If you don’t really know what you have, buying products at the beginning of the project really isn’t appropriate.”

In fact, she says that once her clients take stock, 90 percent don’t need to buy anything extra at all. It’s really the first step of getting organized: Assessing what you’ve got – and being realistic about it.

In Amy Knapp’s Family Organizing Handbook, the Kalamazoo author and mom applauds the “art of imperfection.”

“We’ve created organizing into this monster, when really it’s not,” Knapp says. “I believe the first thing you have to do is stop comparing yourself to everyone else. There is no right or wrong way to organize.”

If this daily stuff – schoolbooks, keys, favorite toys – is constantly MIA, it’s time to create accountability. Anderson-Fermann suggests a “landing pad” in high traffic areas, typically near a back door. It could be an alcove, a drawer or even a box.

The old “place for everything” adage can work well in these cases as long as you’re consistent and explain it clearly to your kids.

“It doesn’t have to be complicated,” Anderson-Fermann says. “Even a 3-year-old can understand the concept of, ‘This is where I put my stuff.'”

Whether surplus food, forgotten duds or seasonal decorations, the other 80 percent of stuff often ends up the looming task that’s shoved out of sight.

Units with lots of compartments and drawers can quickly outlive their usefulness. Ditto expensive, wall-to-wall, kid-themed systems. Go for clear varieties so you can see what’s inside, since bins often get stacked.

And, for that reason, avoid them all together in areas where lots of stuff is accessed, like bedrooms and kitchens.

Embracing your family’s quirks is just as important as shrugging off impossible standards. Knapp recalls a whirlwind cleaning campaign to whip the garage closet into shape. It was spotless. A week later, it was a wreck.

“The problem was, I set unrealistic expectations for my family,” she says. Her improved solution: Four laundry baskets for each person’s mittens and shoes. “It wasn’t pretty, but it worked.”

The lesson – and one of the top tips for getting your home organized? Keep it simple.

Establishing a few simple habits also helps transform hunts for buried bills and lost toys into quality family time. Anderson-Fermann’s rules of thumb: If a household chore or task takes less than three minutes to complete – say, emptying the dishwasher – do it now.

And if you bring something new into the house, try to get rid of one old thing.

A home is only as organized as regular maintenance. But that doesn’t mean it has to be a drudge. Entitle yourself to a sense of accomplishment.

“It’s almost like a celebratory time,” Knapp says. “It’s like, ‘Yeah, I did it.’ The reward is getting the job done.”