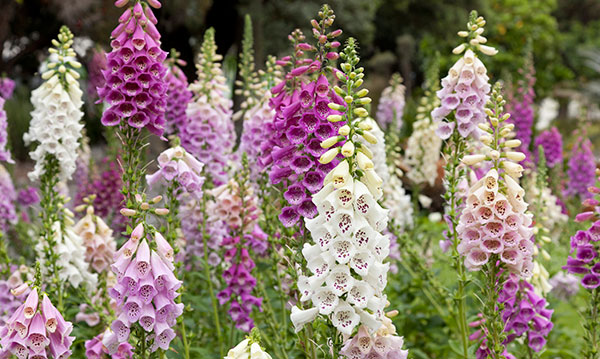 It is spring! Finally! And what better way to welcome the season then with afternoons in the garden. Before heading out, remember the plants you grow outdoors – and indoors– could be harmful to children. We talked to a few local experts on how to help keep your little ones safe around potentially poisonous plants for kids.

“Don’t plant those things that are known to be particularly toxic,” says Dr. Cynthia K. Aaron, medical director for the Michigan Regional Poison Control Center at the Children’s Hospital of Michigan. If you already have plants that are toxic, remove or keep out of the reach of children, Dr. Aaron recommends.

Heather Glenday, general manager of Bordine’s Nursery in Rochester Hills, says to make sure to watch children carefully outdoors and teach them to never put any part of a plant in their mouth. Also, she suggests setting boundaries in the garden. “If a certain area is off limits make sure (children) know that and why it is off limits.”

Toxic plants are varied and common

When it comes to toxic plants, there is “no botanical ‘mark of Cain,'” notes Dr. David C. Michener, associate curator at University of Michigan Matthaei Botanical Gardens & Nichols Arboretum. Many are common garden favorites, so research is vital.

Educate yourself and caregivers on the plants around your home. Identify and label each. Don’t know what’s growing in your yard? “To identify plants, start with your county’s Extension Service and its Master Gardener volunteers,” suggests Dr. Michener. Never assume a plant is safe just because wildlife eats it.

“There are a number of pretty ornamentals that with a small child or a cat I probably wouldn’t plant like digitalis or foxglove,” suggests Dr. Aaron. While you would need to consume a fair amount it – thankfully most children don’t like the taste – the side effects could be serious. “Foxglove is the basis of the cardiac drug Digoxin, so it can slow the heart rate and can cause abnormal rhythm of the heart.”

Others of note include the Dieffenbachia or Dumb Cane plant whose stems, says Dr. Aaron, contain oxalate crystals that can puncture the lips and tongue causing them to swell – they’re also found in the leaves of the Rhubarb plant.

For Dr. Michener, some of his top toxic plants to avoid in our region include Castor Bean, Angel’s Trumpets or Jimpson Weed, Lily of the Valley, Pokeweed or Poke, Monkshood and Yew. The seeds of Castor Beans are “one of the most deadly in the plant world if chewed and eaten” as are the seeds of Angel’s Trumpets or Jimpson Weed, which are “hallucinogenic – or worse,” says Dr. Michener. “If you have children, I don’t advise growing them.”

Sometimes the toxic parts are hidden in brightly colored fruits or berries – especially attractive to younger children – as with Lily of the Valley and those found on the female Yew.

“Certainly children eat the ‘berries’ (of the Yew) and survive – but that’s a fluke of them not chewing the very hard small seed in the center,” says Dr. Michener. “The un-chewed seeds pass through – harmlessly. Even a few seeds, chewed, could be fatal.”

Parents should know that any plant could cause an individual to get ill. Remember that cooking doesn’t always remove the toxins from a plant either. For Poke, sometimes found in salads and pies, Dr. Michener notes, “the plant has to be prepared by someone who understands the multiple steps in processing and cooking that removes the toxins. Don’t send the entire family to the ER!”

Small children could choke on parts of any plant – so keep smaller objects like seeds and bulbs out of reach.

Your child consumed a plant, now what?

If possible, remove the plant immediately from the child’s mouth. Then, call Poison Control at 800-222-1222, says Dr. Aaron. Do not wait for symptoms to show. Available 24 hours a day, seven days a week, the specialists – doctors, nurses, pharmacists – will offer free, quick, expert medical advice.

“We get a lot of these calls and we can handle it very quickly,” says Dr. Aaron. According to the 2014 Annual Report of the American Association of Poison Control Centers’ National Poison Data System, just under half of exposure cases managed by poison centers nationally involved children younger than six.

If it’s an emergency, call 911 immediately.

Symptoms are often benign with just a taste or a lick says Dr. Aaron and most often will cause just gastrointestinal upset. However, symptoms of poisoning could range from a wicked rash (as with Poison Ivy, Stinging Nettle and Giant Hogweed), unusual sleepiness, nausea, vomiting to liver damage or death – all depending on what plant was consumed and how much of it. In the case of Hemlock, Dr. Aaron warns it could cause seizures and that Poison Hemlock, is highly toxic to the heart.

Dr. Michener concurs, “Treat unknown wild mushrooms as a loaded gun with the safety ‘off’ – it only takes one wrong small portion to kill you.”

Generations of now-banned leaded gas have left contaminated soil in many parts of Detroit, warns Dr. Aaron. “If a child is going to be out grazing or playing in it, you might want to bring in bagged soil to protect them,” she adds. Also, if you are going to build a raised garden bed, Dr. Aaron suggests to stay away from freshly treated wood.

“I recommend planting some type of garden with your children to show them how plants grow,” says Glenday. “What parts of plants are useful to us whether it be for enjoyment or eating and how other parts of nature need them just as much as us like the birds, butterflies and hummingbirds.”

Dr. Michener also suggests a visit to Gaffield Children’s Garden at the Matthaei Botanical Gardens “for ideas of how to engage children of all ages with the joys of gardening.”

Note: The plants mentioned in this story are only examples and are not a comprehensive list of poisonous plants.