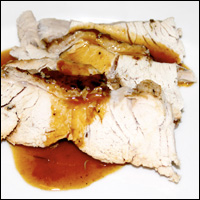 Stuffing. Turkey. Scalloped potatoes. Green bean casserole. Dinner rolls. Pumpkin pie. With so many dishes that need to make their way into the oven on Thanksgiving, wouldn't it be nice if you could cook something on the countertop instead of having it monopolize the oven space? Yes, I'm talking turkey here.

Well, move the bird out of the oven! Cooking a turkey in a slow cooker saves space and – even more important – creates a moist bird with prep time that's all of 25 minutes. See, I'm trying to make your Thanksgiving a little easier. It's true that you won't have that dramatic moment of pulling a full bird with crackling skin out of the oven. But on the plus side, you won't have bones to pick through as you carve or a stack of dark meat that no one seems to be eating (at least around my house, everyone wants white meat).

Still not convinced to choose a turkey breast over the whole bird? That's OK. Here's another idea: Cook both so that you have broth from the Crock-Pot for your gravy and moist white meat to fill out the meat from a roasted bird. This way, you'll also have plenty of turkey leftovers for sandwiches the next day.

You can find boneless turkey breasts on sale right alongside the traditional birds this time of year. They are more expensive, but that's because you're getting just the meat. I often buy a couple turkey breasts while they're on sale, so I can throw one in the freezer to eat during the December holidays.