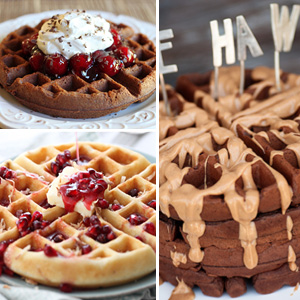 You don't usually think of having waffles for dessert – they're breakfast food, right? Not with these recipes! Making ho-hum waffles into spectacular desserts is easy to do with a little imagination and the right recipe. Plus, it shaves the time to make dessert when you're using a waffle recipe. If you've always loved the cake version, try out the black forest waffles. Instead of cupcakes, you can make funfetti waffles or red velvet waffles with cream cheese glaze. For the candy lovers in your house, try chocolate waffles with peanut butter sauce. There are so many ways to turn your favorite dessert into something you can make with your waffle iron!

Making kid-pleasing waffles doesn't get much easier than this. Pop refrigerated cinnamon roll dough right into your waffle iron. Use the icing that comes with the rolls to make these cinnamon roll waffles with cream cheese glaze from Pillsbury in minutes.

Red velvet has become a sensation at the cupcake counter. Now, capture the striking mix of red, chocolate flavor and icing with this recipe for red velvet waffles with cream cheese glaze from Not Your Momma's Cookie. Time to dig out the red food coloring!

Making a whole cake takes a lot of work. But making waffles that hold all the same flavors is not only quick, but it's fun, too. For these black forest waffles from Barbara Bakes, begin with a rich, chocolate batter. The cooked waffles are topped with cherries and a generous dollop of whipped cream.

You only need a cake mix to whip up these party-ready waffles. Start with a box of funfetti cake mix and make a few tweaks to the standard cake ingredients to use the batter in your waffle iron. Lovin' From the Oven's recipe for funfetti waffles is easy to make. My suggestion? Add even more sprinkles to the waffles once they're cooked.