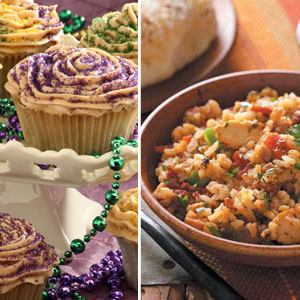 Colorful. Crazy. Over the top. Those are just a few ways to describe Mardi Gras celebrations. This year, Mardi Gras falls on Tuesday, March 4. Translated, Mardi Gras means, "Fat Tuesday" (i.e. time to fill up on rich foods!) in French and marks the end of a celebration season called Carnival. While Mardi Gras is celebrated in various places throughout the world, New Orleans is known best for their parades, festivities and food. Introduce your family to the flavors of New Orleans with these recipes. Make sure to save room for the traditional king cake for dessert. It's baked with a plastic toy inside – and the person who gets the slice with the toy is thought to have good luck for the rest of the year.

Real butter is the key ingredient in this crab-and-shrimp etouffee recipe from Taste of Home. Saute seafood in butter that's peppered with fresh herbs, diced celery and green peppers along with a generous helping of garlic. This dish wouldn't be right, though, without a dash or two of hot sauce. Serve over rice.

Look for New Orleans-style sausage in the refrigerator section of your grocery store to make this sausage jambalaya from Taste of Home. Jambalaya is a bit like a casserole in a bowl – pieces of chicken, ham and diced vegetables are added to the sausage and rice for a filling dish that's even better warmed up the next day.

Along with etouffee and jambalaya, gumbo is a quintessential New Orleans dish. This version of chicken gumbo from Martha Stewart keeps the recipe simple and adds in okra, a Southern favorite.

In New Orleans, when you head out to the café, you're more likely to find beignets on the shelves, not doughnuts. These French fritters are cousins to doughnuts, but don't have a hole in the middle and they're generously dusted with powdered sugar – no frosting needed. To make beignets at home, try this recipe from What's Cooking America.

More like a pastry, the traditional king cake is made with a rich, eggy dough that holds a tunnel of cream cheese inside the ring. While it may look complex to make, King Arthur Flour's recipe for king cake includes plenty of tips. Two elements of the king cake you can't leave out: sprinkling the frosting with the traditional colors of Mardi Gras – purple, green and yellow – and tucking a small, plastic toy somewhere in the dough. The person who gets the toy can look forward to a year of good luck!

For a bite-sized version of this signature Mardi Gras dessert, use this king cake cupcake recipe from Zatarain's. Instead of having a cream cheese filling, like the cake, these cupcakes are topped with cream cheese frosting. Top with purple, green and yellow sprinkles. Now it's time to start your Mardi Gras celebration!