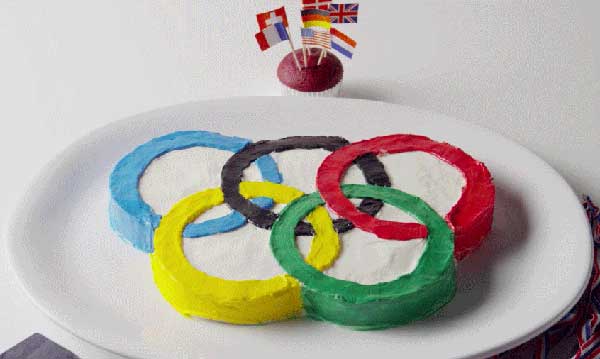 Cue the Olympics theme music – it’s time to watch the world’s greatest athletes compete! What’s one of the most recognizable symbols of the Olympics besides the athletes? The five rings that symbolize unity and link together in blue, yellow, green, red and black along with a white background. Use that to inspire yummy snacks and treats you can make with your family and then eat together while you watch the events. First off, make Olympic rings pizza with cheese or for a lighter version put together Olympic rings fruit pizza. On the sweeter side, your kids will love making Olympic ring cookies, Olympic cupcakes and an oversized Olympic cake.

This fun recipe is so easy to put together – and you probably already have all the ingredients on hand. Start with a flour tortilla and sprinkle with mozzarella cheese. Use chopped up vegetables like tomatoes, thin-cut purple potatoes, yellow squash, olives and broccoli to create the rings. Bake until crisp. That’s it to make this Olympics rings pizza from Snapguide.

These Olympics inspired snack recipe from See Vanessa Craft are quick for your kids to assemble. Spread a little bit of cream cheese or peanut butter on small rice cakes. Next, put different colored fruit pieces on each one. Then, put the rice cakes together to look like the Olympic rings.

Think of this recipe for Olympic rings fruit pizza from Taste of Home like a big, frosted cookie. Start by making a rich cookie dough and shaping it into five circles and press together to form the Olympic logo. Bake and then cover with a cream cheese frosting. The final touch? Line each circle with different colored fruit pieces.

Break out the food coloring to create these cute Olympic ring cookies from Serious Eats. Use sugar cookie dough as the base then separate into five large pieces. Add red, yellow, green and blue coloring (the final color will be a little more brown than black but your kids will get the idea). Roll out the dough and use a doughnut cutter to create the ring shapes.

Mix up a batch of yellow cake mix and divide the batter in half. Use blue food coloring in one and red in the other. Place the red batter into muffin paper cups first and then add the blue. Bake. Frost with white icing and add a green, yellow, red, black and blue M&M on each one. This recipe for Olympic cupcakes from Sweet and Simple Living makes about 24.

Bake a devil’s food cake according to the package directions in a 9-by-13″ pan lined with parchment paper. Remove from the pan and cut into five circles to make the rings. Place together and frost, leaving extra frosting to dye to make blue, black, red, yellow and green. To serve, add little flags from across the globe to the sides of the plate of this Olympic cake from Parents.