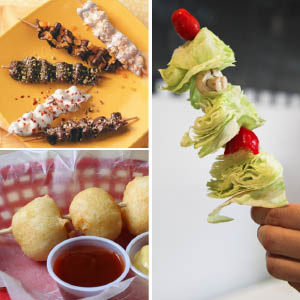 Late summer is state fair time. The granddaddy of them all is the Iowa State Fair, held Aug. 8-18, 2013. During the event, visitors can make their way through 200 food booths and sample over 60 (yes, 60!) foods on a stick. You can find just about anything on a stick, from calorie-defying deep-fried butter to healthier fare, like skewered smoothies. Each year, the fair introduces new foods to entice visitors to try even crazier culinary combinations. This year, you can try shrimp corn dogs, bacon wrapped pork riblets, deep-fried brownies, deep-fried sweet corn corndogs, jalapeno corndogs and much more.

But you don't have to go all the way to the fair to get a taste of food on a stick. Make some of your own versions with these recipes. Bonus: Most of them aren't fried.

Crescent Dog on a Stick

Forget all the work of making a homemade corndog. Instead try this crescent dog on a stick from Pillsbury. To make, put hot dogs onto a stick and then add a slice of American cheese (for easy melting). Wrap crescent dough over the hot dog and then bake. Easy peasy corndogs!

Salad On a Stick

Fair food doesn't have to be fattening! Layer lettuce, tomatoes and mushrooms on a skewer to make this salad on a stick from Better Recipes. Now, where's the dressing?

Mashed Potatoes On a Stick

These savory skewers are simple to make. Thread uncooked bacon strips onto wooden skewers, then bake. Once they're cooked, dip the bacon into white or dark melted chocolate and then sprinkle with toppings like red pepper flakes, toasted coconut or whatever else appeals to your kids. Follow this simple recipe for chocolate flavored bacon from Taste of Home to make a whole batch!

Brownies On a Stick

Brownies dipped in chocolate – oh, yeah! The Prepared Pantry offers this brownies on a stick recipe that uses any brownie mix. Bake up a batch and then roll brownie squares into balls before bathing them in chocolate. Sprinkles are optional!

Serious Eats recipe for chocolate covered Fig Newtons would work well with most packaged cookies. First, push a Popsicle stick into a Fig Newton. Dip into a cup of melted chocolate and you can make dozens of treats on a stick in minutes. No doubt your kids will come up with plenty of other foods that make for yummy, skewered snacks. Oreo on a stick, anyone?