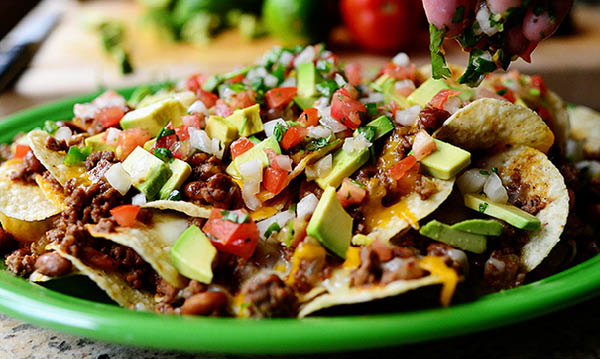 Are you ready for this year’s Super Bowl? One of the easiest snacks to serve during your celebration is nachos.

Basic nachos include just two ingredients: cheese and tortilla chips. There are so many ways to build on the basic version to create a memorable treat your family will remember long after the final seconds of the game.

Create your own fusion nachos by playing with the flavors like the recipe for BBQ pulled pork nachos or buffalo nachos.

Make something sweet by putting together dessert nachos or apple nachos. Now who’s ready for some football?

Use leftover or rotisserie chicken to start this mouth-watering recipe for chicken, guacamole and bean nachos from CHOW. Spread a layer of chips on a baking sheet followed by cheese and another layer of chips and cheese. Once the cheese is baked and bubbling, top with chicken pieces, refried beans and guacamole. 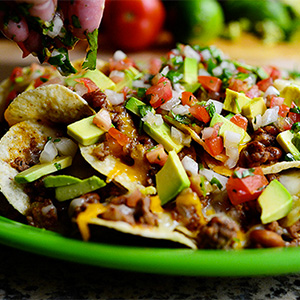 Take your ho-hum nachos to the next level. The Pioneer Woman’s recipe for loaded nachos walks you through how to season ground beef perfectly before adding it tortilla chips. Mix up fresh salsa to serve on the side for the football fans at your house.

Spice up your Super Bowl party with these BBQ pulled pork nachos from Real Mom Kitchen. The tangy barbecue sauce mixed in with the pork and beans meld perfectly into the cheese as a topping for the chips. The final touch? Sprinkle coleslaw over the nachos.

Combine two party favorites with this recipe for buffalo chicken nachos from Frank’s Red Hot. Toss diced chicken with hot sauce before spreading the mixture over the chips. You can even try this recipe with shrimp, too.

Nachos don’t have to be savory. Make up a big plate of these dessert nachos from Sally’s Baking Addiction. Coat flour triangles with melted butter, cinnamon and sugar before baking them. Drizzle the chips with homemade chocolate sauce and dollops of whipped cream.

These apple nachos from Taste of Home are a great way to make a healthier version of the standard recipe. Slice apples thin to use as “tortilla chips” and layer them on a plate. Drip caramel ribbons and marshmallow sauce all over the apples – and then sprinkle with chopped peanuts and mini chocolate chips.