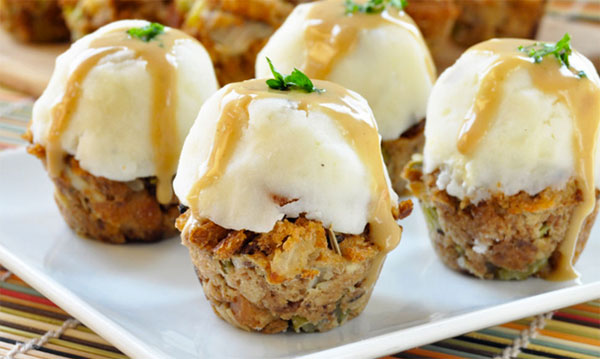 Stuffing is to turkey what peanut butter is to jelly. You just can’t have one without the other, especially on Thanksgiving! While everyone has their prized recipe, why not bake up a new one this year? Or better yet, offer your family and guests two kinds of stuffing – you can never have too much stuffing, after all. For more traditional flavors and presentation, try sausage and cranberry baked stuffing, butternut-bacon stuffing or cornbread stuffing. For something completely different, bake up your stuffing in individual portions with an apple and onion stuffin’ muffins recipe or a stuffing muffins with mashed potatoes and gravy recipe.

For this sausage and cranberry baked stuffing from Betty Crocker, saute spicy pork sausage until cooked through and add in chopped celery and onion. Mix the sausage with dried sage, cranberries and dried bread cubes. Place into a casserole dish. In a bowl, whisk together broth, milk and eggs before pouring over the bread. Refrigerate overnight and then bake for 35 to 40 minutes.

Instead of regular bread, use sourdough to make this butternut-bacon stuffing from Cooking Light. First, mix chicken broth and eggs with dried sourdough cubes. Roast the butternut squash and then add in bacon pieces and diced onions. Bake until your house is filled with the smell of herbs and bacon.

Make Thanksgiving a little sweeter with this recipe for cornbread stuffing from Martha Stewart. The cornbread soaks up the flavors of fresh sage, chicken broth and diced onion that are mixed inside. The final ingredient? Pats of butter you add on the stuffing before it bakes.

Dress up a box of stuffing mix with extra fixins’ – that’s the idea behind this Italian sausage & kale stuffing from Kraft. Cook the sausage and then add in chopped kale. Mix up the stuffing according to the box directions before adding in the kale and sausage. Sprinkle walnuts on top to finish off the dish.

Stuffing doesn’t have to go into the turkey—or a casserole dish. Make these apple and onion stuffin’ muffins from Rachael Ray to have with your holiday bird. The stuffing mix has the same ingredients as the basic recipe but you also add in an egg and extra butter. Put the batter into muffin cups and then bake up to crisp perfection.