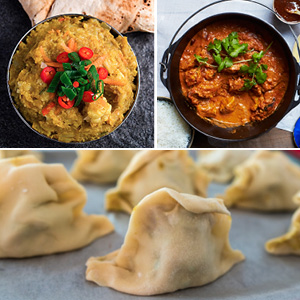 Cumin, cardamom, garlic, ginger, turmeric, anise and saffron – these are just a handful of the spices that are familiar in Indian cuisine. You don't need to go out and buy every Indian spice to start making dishes from the country. Instead, start simply with a few recipes, ingredients and spices. These dishes will give you a taste of some of the diverse dishes that make up Indian cuisine. For an appetizer, try samosas, a calzone-like mini pocket that's filled with mashed potatoes and peas. Naan, is a delicate, buttery bread that's often used to dip into dishes such as vegan Indian cauliflower mash. For a main course, try traditional butter chicken or tikka masala. Ready to add a little spice to your life?

To make the filling for these samosas from Ekant Cook Curry, you'll need to stockpile a few Indian spices like garam masala, cumin, coriander and smoked paprika. Put together a smooth dough, roll out, and then fill with spiced, mashed potatoes and peas. These crisped dough pockets make for a satisfying start to your Indian meal.

Boil bite-sized pieces of potatoes until tender to prep this Indian dish called aloo jeera from Manjula's Kitchen. Bring oil to a medium-high heat before adding the diced potatoes. Add Indian seasoning to the potatoes, including cumin seeds and for a hint of zing, red chili powder, also called cayenne powder.

This popular Indian main dish includes a hefty helping of whipping cream that makes for a creamy sauce. This finger lickin' butter chicken, called murgh makhani, from the Little Spice Jar, starts with a mixture of ginger and garlic cloves pounded together with vinegar to marinate chicken. But the trademark red color comes from crushed tomatoes that are blended into the sauce. Serve over rice to soak up every drop.

If there's one dish that captures the depth and richness of Indian cuisine tikka masala is on the top of the list. This version of chicken tikka masala from Bon Appetit you through every step of the recipe from gathering the right spices to creating the complex sauce.