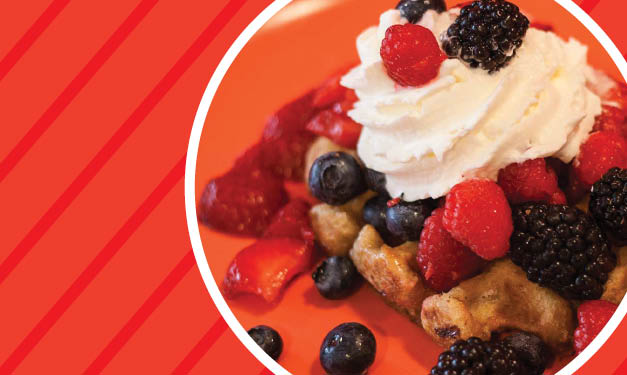 Golden and grid-like, waffles are a total treat for kids. The allure never wore off for Noah Goldsmith, founder of The Wafel Shop in Ann Arbor.

"It was my breakfast of choice, for sure – starting with the frozen Eggo," he says. "It's different for kids. It comes in a fun shape." And, "It's one of those items where the parents tend to give kids a little control" on the toppings.

This month, Goldsmith's shop celebrates its first birthday. It serves up authentic, from-scratch Belgian Brussels waffles – and prides itself on its Liege waffles. "We're one of very few places in the Midwest to be making them," he says. "It's a sweet waffle." That's due to its star ingredient, pearl sugar, which, Goldsmith says, looks like little pieces of rock candy. The end result is dense and chewy, with a rich vanilla bean and cinnamon kick.

The Wafel Shop – spelled Dutch-style – also boasts local ingredients, from produce to butter. A new PB&J waffle on the menu has jelly from Cherry Republic in Ann Arbor and Koeze peanut butter from Grand Rapids.

Note: Be careful: If you over-whip, you'll end up with butter!