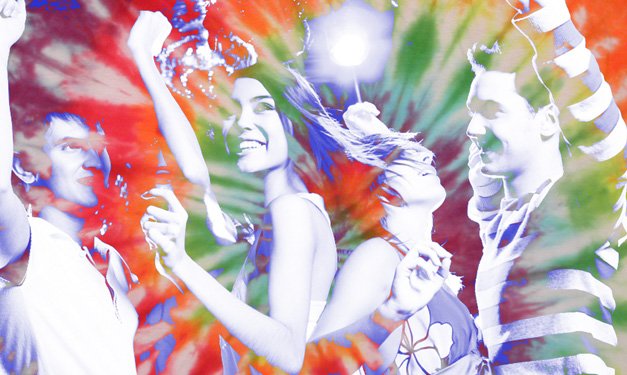 Need an excuse for a party? Odds are your tween or teen doesn’t! Whether it’s just getting a few friends together or creating a unforgettable big bash, 87 Ways to Throw a Killer Party is the ultimate planning guide for kids.

It’s packed with dozens of original themes (and fresh spins on classics), all created by writer Melissa Daly, former Seventeen magazine editor and co-author of Sunscreen, a tween nonfiction series on health and relationships.

Here, publisher Zest Books – an “award-winning line of smart and edgy titles that focus on the colorful chaos of teen life” – was cool enough to let MetroParent.com share three of these killer concepts. Check ’em out – and pick up the book for loads of additional ideas, plus tips on gear, hosting etiquette, avoiding party pitfalls and tons more!

In the summer of 1969, hippie flower children from all across the country descended on a farm in Bethel, NY, for a momentous, three-day outdoor music festival held in the name of peace, love and rock ‘n’ roll. Woodstock went down in history as one of the wildest, most legendary concerts of all time, drawing more than 30 musical acts and 400,000 people. The ’60s might be over, but you can keep the memory of Woodstock alive by throwing your own version right at home.

Transform your living room into the back of a psychedelic Volkswagen van. Lay out colorful tapestries and pillows on the floor and string love beads from the light fixtures. Replace the bulbs with black lights and hang black-light posters (designed to glow bright colors under the purple-ish lights) on the walls. Play a lava lamp video on your laptop – or pick up a real one.

Tell your friends to come decked out in hippie fashions: low-rider bell-bottom jeans, tie-dye shirts, peasant blouses and fringed vests. Wear your hair super-long and pin-straight or in a wild afro, and top it off with a ring of flowers or bandana. Complete the look with a bunch of beaded necklaces and peace-sign accessories.

There was a major food shortage at the original Woodstock, so a peace activist known as Wavy Gravy stepped in to organize free brown rice, veggies and granola. Be like Wavy and serve these staples to your hungry masses!

Rain turned Woodstock into a giant, mud-slicked playground. Create the same thing in your backyard by hosing down a non-grassy area with water. Or set up a long stretch of plastic tarp on the lawn, throw on some fake-mud powder, aim a hose at it, and let your friends slide down the muddy strip after a running start. In the background, play music from the bands that took the stage back in ’69 (see the playlist just below). To complete the experience, camp out in your living room – or right in the backyard.

Whether it’s a birthday, New Year’s Eve or a new month, there’s always a way to celebrate the passage of time. So turn it into a truly epochal affair: Host a time travel-themed party, where guests come dressed as if it’s 100 years ago – or 100 years in the future!

Search online for images of newspapers featuring major events from a century ago, like World War I and the Titanic disaster. Print them out (blow them up on a photocopier if necessary) and display them on one side of the party room, along with vintage newspaper ads from back then (find these at online poster shops). For the other side of the room, create your own newspaper-like images with headlines for events that might happen in the 2110s: “December 7, 2114: Mars Invades Venus!”

Guests can dress in general period costumes – or be more specific, like a women’s suffragette, a Spanish Flu-era nurse or Charlie Chaplin. Someone could wear a vintage-looking suit or a dress with a life jacket and be a passenger of the Titanic, which sank in 1912. Or two buddies could wear old-school army uniforms and go as British and German WWI soldiers during the Christmas Truce of 1914, when the enemies took a break from shooting at one another to sing carols and play soccer.

As for the future, it’s anyone’s guess! Typical costumes involve metallics, Star Trek-style bodysuits or extraterrestrial makeup. But you could go with a “statement” costume instead – like something involving a wetsuit to imply a tomorrow where climate change has flooded the Earth, or a man with a pregnant belly to show how modern medicine might make it possible for a man to carry a child.

Place a makeshift time machine in between the two sides of the room. Create it by covering cardboard with tin foil, or just re-arranging tall furniture, like bookcases, to form a secluded nook. Then, hang a foil doorway curtain (sold at party stores) on either side. Place two chairs inside and a light of some kind, and decorate the inside to look like the dashboard of the Back to the Future DeLorean or the time travel device of your dreams. Duct-tape your camera (set on auto-timer) to the cardboard or sit it on a shelf facing the chairs. Guests come in one side, take a few pictures, then exit on the other side into a different era!

Once a month on the full moon, up to 30,000 people from around the world flood onto Haad Rin beach on the Thai island of Koh Phangan for the all-night beach rave known as the Full Moon Party. Recreate the fun at your own celebration the next time the moon is full.

Figure out the dates of the full moons over the summer, and pick one. If there’s a beach nearby that allows nighttime parties, bonfires and camping, hold your event there – otherwise, a backyard works just as well. Guests should stay over if possible, since the goal of the full moon party is to dance till sunrise. Realistically, everyone will need to take a break at various points. If your party’s at a house, create a chill-out room with everyone’s sleeping bags and pillows, along with snacks and drinks.

On Haad Rin beach, you’d also see pros dancing and juggling with fire. You definitely don’t want to imitate their daring feats with actual flames, but you can create a similar vibe with glow sticks and other neon toys, like hula hoops, poi (balls on strings that you twirl) and staffs (large batons that you spin).

Dancing all night makes you thirsty, so you’ll need lots of soda, juice, and water. Serve it Koh Phangan-style: in buckets! Get a bag of large straws and go to the dollar store for the smallest plastic beach pails you can find. For food, have some Thai takeout delivered, like pad thai or curry followed by sticky rice with mango for dessert. Or simply pick up some mangos – dried or fresh – and some chili-spiced nuts (see recipe just below).

As your friends arrive, descend on them with neon orange, green and pink body paints. Apply them in tribal stripes as war paint (staying up till dawn is a battle). Then, let the dancing begin! Make a bunch of playlists and/or ask several friends to take DJ shifts throughout the night, so that the music never stops – at Full Moon, the vibe is typically dance, trance, techno and reggae.

Toss raw peanuts with a little bit of olive oil, sugar and coarse salt; then roast on a baking sheet in a 350-degree-F oven for about half an hour, stirring every now and then. Next, dump them into a bowl and stir in two teaspoons of limejuice, a teaspoon of hot pepper sauce and some cayenne pepper. Cool and store till show time.

This article was originally published in 2012 and has been updated for 2016.