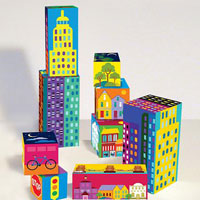 Brooklyn-born William F. Lamb left his mark on New York City when he designed the 102-story Empire State Building, which completed construction in 1931 and is among the tallest buildings in the world. Your kid may be far from the age of designing his own architectural masterpiece – but that doesn't mean he can't get a head start on building his own mini metropolis with some sweet stacking blocks!

Kids ages 6 months to 3 years can engage in hours of open-ended play with CityBlocks Stacking Blocks, which are covered in illustrations of streetscapes – depicting cars, buildings and streetlights similar to those you'd see in a children's book. In fact, Dan Crisp, a father and freelance illustrator whose drawings have appeared in various children's books including Tyrannosaurus Reg and Where's That Duck?, designed these stackable pieces.

The set includes 10 vibrant blocks that let kids create a four-foot structure – or an entire city scene. And while a four-foot building may not compete with the Empire State, it's pretty tall for your little tyke! Kids will get a kick out of not only building the city, but destroying it, too. They can unleash their inner Godzilla and knock the blocks down; then rebuild and start all over.

The blocks fit inside of each other Russian doll-style to save space when your kid is done playing. They're easy to haul around, too, if you keep the box – which is illustrated to match the stackers. It has a handle that lets kids carry the box around with ease.

The set, which was released in September, sells for $21.99 at local stores like Mudpuddles in Ann Arbor, Shine in Royal Oak and Plum Market in both Ann Arbor and Bloomfield Hills.