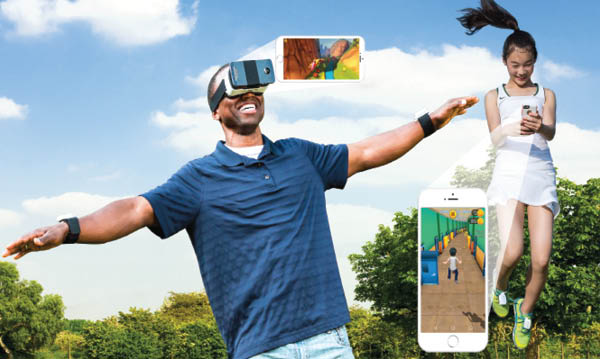 The Correa family of Shelby Township is shaking up digital gaming in a big way – with a little light-up gadget that clips to your sneakers or straps to your wrist.

That’s because it tracks motion and transmits it to one of four mobile games that require kids to flap their arms, jump, duck or dance around. There are even special goggles that turn your smartphone into a virtual reality headset.

It all began when Amy, a physical therapist, and husband Colt got their daughter Lydia, now 13, a pair of light-up LED shoes for her birthday – which broke in two days. Colt, an electrical engineer, was convinced he could create something better.

He did. And soon the family – also including Caleb, 15, and Nathan, 5 – was brainstorming games, names and a Kickstarter campaign to fund their invention.

“It’s not just for kids, but what we hope it will provide is an active and fun way to play mobile games,” Colt says. “It is completely mobile, so the players are not stuck inside locked to a console game that can only be played indoors.”

Ages 8-plus • $100 (includes system and all games)
Pre-order now; shipments start in December.