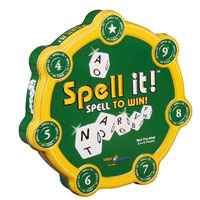 Looking for a new addition to family game night? Look no further – Spell It!, the latest creation from Blue Orange Games hit store shelves on April Fool’s Day – and it’s a sure-bet edu-taining game for parents and kids alike.

Suitable for ages 8 and up, this spelling game is simple. Pick a theme, roll the lettered (not numbered or dotted) dice and start spelling!

Let’s start with the themes. There are seven to pick from:
• Around the World
• Create a Theme
• Famous People
• Home Sweet Home
• No Nouns
• Sports, Games and Hobbies
• Wildlife

Roll each of the five dice and try to use three of the five letters you roll to come up with a word that relates to the chosen theme. Say the word and spell it. If you spell it properly, then you pick up a chip that’s equivalent to the number of letters in your word.

For example: You roll the letters C, P, M, O and S. One player shouts out COMPUTER, spells it and wins an 8-point chip. He used four of the five letters rolled, so he gets the points.

Chips range from 4 to 10-plus points. Pick up the proper number according to the word you spelled, and when all the chips run out – the game is over. The person with the highest number of points is the winner.

There are a few variations of this game, including Amateur Spell for younger players, which allows them to use two out of the five letters shown on the dice to come up with words. Then there’s Master Spell, where players call out the number of letters then say the word – and Speed Spell, where the first person to collect 40 points wins. And finally, there’s Free Spell – where no theme is used and all players try to find any word using three or five of the letters.

Seeing words in the letters is the trick to winning the game. You’ve got to be fast and word savvy! It’s a great exercise to get your kids to boost their vocab power – and have a blast doing it.

So, if you’re up for a word challenge, pick up Spell It! for $19.99 at the Doll Hospital & Toy Soldier store in Berkley and Adventures in Toys in Birmingham.