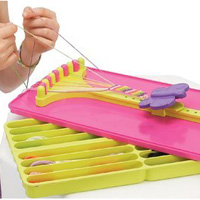 Twisting colorful strands of embroidery floss into a pretty little friendship bracelet can be tricky business for a young child. But what if we told you there’s now a better way to create this girly favorite?

It’s called My Friendship Bracelet Maker. This handy device – created by a family right here in southeast Michigan – has two nifty features: An adjustable butterfly clip to firmly clamp one end (the part that’s usually pinned or taped down), and an ingenious line of 10 “string holders,” which keep all those loose ends separated and in order. To boot, the kit includes 56 precut threads in 14 different colors and ample string storage.

Necessity was the mother – or in this case, grandfather – of invention. David Crorey of Clinton Township was babysitting his two granddaughters one day and helping them make friendship bracelets. But trying to keep the strings straight and secure quickly became a frustrating, time-consuming chore.

“It was just a nightmare,” David recalls. There had to be a better way.

So David, a retired auto executive, tapped into his connections with local engineers and designers to execute a design. In the process, his start-up even hired some unemployed workers (read: great way to support Michigan residents!). The family now has their own local toy company called Crorey Creations.

“We debuted it at the New York Toy Fair,” says Julie Crorey, David’s daughter and head of marketing for the company. Since the show in February, their $24.99 product is now in 400 independent toy stores across the country – along with Hobby Lobby and Michael’s. Starting in October, it’ll also be available at Costco, Meijer and Kroger. It’s even been showcased on QVC!

The kit’s precut strings come in vibrant pinks, purples, blues and greens, to name a sampling. Pick your colors (up to five), fold the string in half, tie a knot and hook the knot under the butterfly clip.

We gave it a test spin, and the clip really does fasten the looped end firmly – and the string holders are the perfect size to keep the loose strings in place during construction. Instructions on creating a few classic designs are included. Need a shorter bracelet? Just notch the butterfly clip down for optimal length.

And for those who think this takes the work out of making the bracelets, think again. “It doesn’t take away any of the crafting,” Julie says. “It’s like a tool to use.” We’d say it’s a pretty cool pick for your daughter.

P.S. If you get stuck when making your bracelet, check out the My Friendship Bracelet Maker site for instructional videos, too!