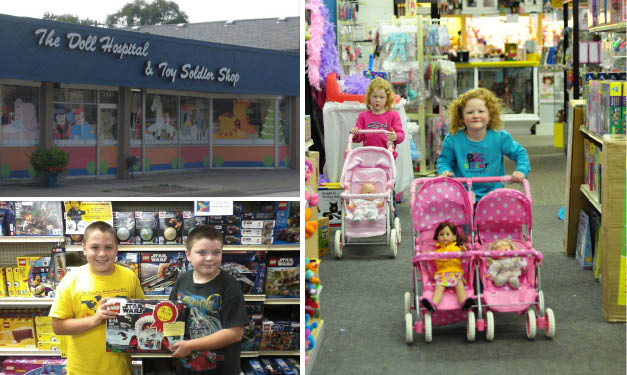 Did you know one of the biggest independent specialty toy stores in the United States is right here in Oakland County? That's right: The Doll Hospital & Toy Soldier Shop in Berkley has been a family-owned staple for generations, stocking some of the coolest kids' play goodies in town – not to mention, restoring beloved keepsakes – at its whopping 30,000-square-foot space.

This veritable "toy land" has deep roots – and a boatload of niches, from outdoor play sets and trampolines to arts and crafts, games, early learning toys and tons of brands parents and kids love.

The tale starts back in 1948, when founder Kay Parish made a bold move, says her granddaughter, Stacey Zagrodzki – now the store's president.

"She went and asked my grandpa one night, 'Can I have $2,000?'" Parish, a hairdresser married to a teacher, wanted to buy a "doll hospital" in Detroit. "She must have got the money," Zagrodzki laughs. "She was a feisty little lady," at 4'11" tall – and one who "definitely had a business mind."

"My grandma had her white gloves" for folks to handle dolls – after washing their hands, Zagrodzki says. "When you bought it, you had something really special."

Zagrodzki and her family got into the thick of the business in the early 1970s, when her dad, Jack, bought the toy store and took over, moving it to Berkley.

From a tiny one-room, one-woman show, the store now booms, with lots of hands-on fun for kids. It was Jack who launched the "toy soldier" element – and also brought in loads classic toys from Europe (where the family previously lived).

With both stock and the staff, unique volume is the specialty. Less than 5 percent of the toys overlap with big-box fare, and some 15 family members work here (give or take, if you're counting seasonal work). The crew includes siblings, spouses, nephews, even grandkids. Jack's still the CEO and runs the shop's busy ReallyGreatToys.com website.

Some of the quality brands you'll find include Alex, LEGO, Manhattan Toy and Melissa & Doug – plus Playmobil, Creativity for Kids, Madame Alexander and lots more. There's a teachers' store and backyard play sets, too.

Yet doll repairs remain a staple – though, now, it's mostly sentimental. "They might spend 20 times what it's worth to get it fixed," Zagrodzki says. "Some of the work we do is museum-quality."

Pros Janice and Janet have restored well-loved dollies aplenty. And some quirkier stuff, too – like a four-foot Jesus statue and a "rush repair" on a plush monkey for "one of Detroit's toughest athletes. I won't name names," laughs Zagrodski.

But don't worry. There are always fresh surprises at this family fave!