Home Health & Fitness Children's Health A Cold or the Flu? How Parents Can Tell the Difference 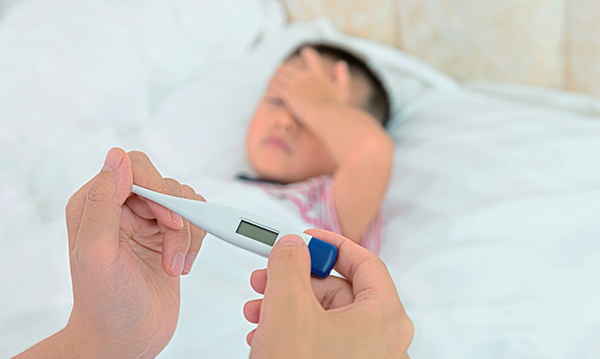 When kids come home with a sore throat, runny nose or fever, a parent’s first goal is to get them comfortable.

For many families, that means straight to the bedroom or sofa and bring on the blankets, TV, chicken broth and Popsicles.

After that, the parental questioning begins. How serious is this? Has anyone else been sick lately? And, importantly, could it be the flu or is it just a cold?

That’s a key question to consider, says Dr. Banu Kumar, M.D., the chief of pediatric medicine at Children’s Hospital of Michigan in Detroit.

The similarities tend to leave parents unsure whether their child needs to see a doctor or not. But with influenza already popping up in metro Detroit, a case of the flu – with all its potential complications – is a possibility on many parents’ minds.

Fortunately, there are some ways to tell the difference – though they don’t replace the importance of consulting with your child’s doctor.

First and foremost, a cold is generally a mild illness.

“Generally with flu, the symptoms are much worse than the common cold,” Dr. Kumar explains. “With flu you can also have complications. Colds don’t generally result in serious health problems.”

That’s not to say there aren’t other viruses that can cause serious illness; those are out there, too.

“Flu is caused by influenza viruses but there’s a whole lot of other viruses … that can make you equally sick,” she points out. But the common cold, by and large, is mostly mild.

“Generally speaking, a cold just gives you a little runny nose and congestion,” she says. “With flu you have a whole lot of other symptoms, which are usually worse. People are going to feel very sick [often with] fevers, body aches, headaches, sore throat, chills and tiredness.”

When a child feels that unwell, especially if they’re behaving out of character or refusing to eat or play, “you’re going to want to get it checked out.”

Vomiting and diarrhea are also possible symptoms of influenza.

“Common cold shouldn’t make you that sick,” she notes. “Particularly with younger children, if they get the flu they’re going to be not wanting to do much, just laying around, not eating and drinking much.”

How the illness progresses is sometimes another way of distinguishing between the common cold and the flu.

“Flu comes on pretty rapidly,” Dr. Kumar says, and it doesn’t go away as quickly as a cold.

Symptoms that keep up without much progress each day, including persistent fevers and body aches, point to the flu rather than a cold.

“The one thing to remember is not everyone with flu gets a fever,” she points out. “Just because a child doesn’t have a fever, you don’t want to think ‘Oh, this cannot be flu.'”

When to see a doctor

The only way to know for sure whether your child has a cold or the flu is for a doctor to perform a simple flu test.

“Typically the sooner you’re diagnosed and the sooner you get started on the medication, the better,” Dr. Kumar says, explaining that Tamiflu is prescribed in some cases and other times it’s a matter of treating the symptoms as they arise. “Nothing is 100 percent. It’s a question of appropriate symptomatic management as well as treating the complications that’s going to be more helpful, not just the flu medication.”

Potential complications could include pneumonia or an ear infection or sinus infection that require antibiotics. Another dangerous complication is dehydration, which could include signs like urinating less often, decreased activity and fewer tears when the child cries. Children displaying signs of any of these complications, or other symptoms like trouble breathing or high fever, should be seen right away.

Parents should remember to trust their instincts and keep in close contact with their pediatrician.

“A cold is generally mild and benign and you don’t have to worry about it and it goes away, but when you can’t tell the difference, you don’t want to sit on it,” Dr. Kumar emphasizes. “Flu can be pretty nasty and it can make them very, very sick. With children, it’s always safer to get them checked out by the doctor.”

And remember that prevention is the best medicine. That includes getting your whole family vaccinated against the flu and practicing proper hand-washing (soap and water for at least 20 seconds) and sanitization methods at home and while out in the community.

“The flu vaccine is really important. It’s important to get it every year,” she says. “Everybody 6 months and older, healthy adults, older people, everyone should get the flu vaccine. It’s all the more important because if other people don’t get vaccinated, they can transfer the flu to children who are younger than 6 months who cannot get the vaccine. To protect these little babies, it’s important that everybody get vaccinated.”