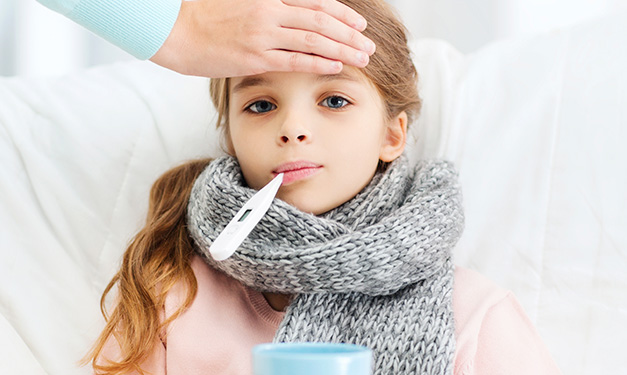 You may be surprised to learn that “stomach flu” isn’t really influenza at all.

“It is a very common misconception that the “stomach flu” and the flu are one in the same,” says Dr. Lisa Saab, a board-certified pediatrician at Henry Ford Medical Center – Ford Road in Dearborn. “Stomach flu is an inflammation of the stomach and intestines. Influenza is usually a respiratory illness, but may also have stomach and intestinal symptoms as well,” she explained. Saab believes the similarity in symptoms, along with the “flu” name, may lead people to confuse the two illnesses.

“Flu can be a severe illness often leading to complications, hospitalizations and even death,” Dr. Saab said.

In 2014, at least four Michigan children were reported to have died from “flu-like” disease. The flu generally occurs between October and April. Over the past 35 years, February has been the peak month for flu cases in Michigan, according to the Michigan Department for Community Health (MDCH).

“Colds and flu are two different illnesses as well,” Dr. Saab continued. “Colds are caused by numerous different groups of viruses, while the flu is caused solely by the Influenza virus,” she said.

According to the Centers for Disease Control (CDC), cold symptoms are usually milder than the flu. People with colds are more likely to have a runny or stuffy nose. Colds generally do not result in serious health problems, such as pneumonia. Fever, dry cough, shaking chills, body aches and extreme weakness are common flu symptoms.

“Unlike a cold, the flu can make it difficult for a person to even get out of bed,” Dr. Saab said. “This is especially true in individuals with underlying health conditions, including asthma and diabetes.”

Dr. Saab said that antibiotics are not routinely used to treat the common cold and the flu. “Colds and flu are caused by viruses and cannot be treated with antibiotics, which treat only bacterial infections, therefore would not be effective,” she explained.

While the flu can indeed be deadly, Dr. Saab said that taking a flu shot each year can decrease the risk of developing the disease. “People 6 months and older should receive the flu vaccine because flu can lead to severe illness and even death, even in otherwise healthy individuals,” she said.

The best time to get a flu vaccine is in the fall, before flu season starts, so your body has time to build up immunity. However, doctors say that getting a flu vaccine anytime during flu season still offers some benefits. It may take up to two weeks for protection to develop.

In addition to getting vaccinated, the CDC says families can practice preventive steps like staying away from sick people and washing your hands often to reduce the spread of germs. Developing other good health habits, like getting plenty of sleep, being physically active, drinking plenty of fluids and eating nutritious food will also help fight off colds and flu.