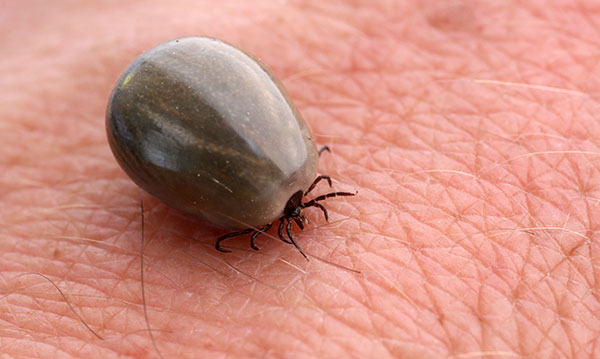 Do you ever hear a word that automatically makes you itch? Tick is probably one of those words. They’re nasty little buggers that want nothing more than to embed their heads in your skin and suck up as much of your blood as they can – ick!

They can also carry diseases that can be fatal, which can make them an overlooked summertime danger. So how can you keep them off of your kids, and what should you do if they do latch on?

Dr. Leonard Pollack, the division head of inpatient pediatrics at Henry Ford Health System, reveals all the dirty details on these suckers and how you can protect your family.

Ticks like to hide in tall grass and wooded areas awaiting their prey.

According to the Centers for Disease Control and Prevention, ticks recognize their hosts by scent, vibrations and, in some cases, shadow. They hold onto the end of plants and, when the victim walks by, they climb aboard.

If you’re headed to an area that might be a tick’s happy home, like an outdoor nature center or bike trail, the doc recommends covering yourself.

“Clothing should cover as much as possible,” the father of six says. “Ticks can get at the other skin, but are much less likely if the skin is not exposed.”

You can also use insect repellent with DEET to help keep them off of you and shower once you’re inside to wash off any that did latch on.

The CDC recommends showering within two hours of being outdoors. It also says that you should check all areas of the body, including the armpits, groin, ears, hair and belly button.

Putting your clothes in the dryer on high for 10 minutes to kill any ticks that have ridden home is also a good idea.

If a tick does make itself at home in your blood vessels, it is imperative that you remove the tick as soon as possible.

“The longer the exposure to the tick, the more likely the tick is to infect you,” Pollack says. “Grab it as close to the skin as possible and remove it that way.”

The CDC recommends using fine-tipped tweezers to grasp the tick and pull upwards without twisting or jerking, as these motions can cause the tick’s “head” to detach and remain embedded.

Do not use nail polish, petroleum jelly, essential oils and other methods.

“Wives tales about smothering it with petroleum jelly or a hot match may be effective in removing the tick – but not the disease,” Pollack explains.

After removal, wash your hands and apply rubbing alcohol, iodine or soap and water to the area. Dispose of the tick by placing it in alcohol or in a sealed container, wrapping it in tape or flushing it down the toilet. Don’t crush the tick with your fingers, and don’t drop it back on the ground for someone else to pick up.

According to the doc, there are two types of tick-borne diseases that Michiganders should know about: Lyme disease and Rocky Mountain spotted fever. Both of these diseases, according to both Pollack and the CDC, cause a rash and a fever.

Lyme disease is also identified by a headache, the CDC explains, and can travel to the joints, heart and nervous system.

Those with Rocky Mountain spotted fever, which is carried by the common dog tick, suffer from headache, abdominal pain, vomiting and muscle pain. This disease can have a mortality rate of 20 percent, Pollack says.

“The general recommendation is, if you know your child has been bitten by a tick and, within the next few weeks, they develop a rash or a fever, then the child should be checked out,” he says. And if you do need to seek medical attention, make it clear that a tick has bitten your child.