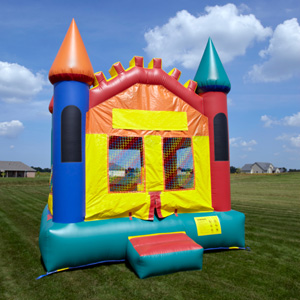 If you were thinking of renting a bounce house for your kid's backyard birthday party, you may want to think again.

A recent study published in Pediatrics found that over a 21-year period, the number of inflatable bounce house- and moonwalk-related injuries has skyrocketed among the nation's youth.

Researchers discovered that from 1990 to 2010, more than 64,000 kids ages 17 and under were treated in U.S. emergency rooms for injuries related to the inflatable party favorites. The study also found that the increase in these injuries was "more rapid during recent years, the annual injury number and rate more than doubling between 2008 and 2010."

What's more: In 2010 alone, 31 children were treated per day in emergency rooms across the nation, meaning a child was seen for inflatable bounce house-related injuries every 46 minutes, the study says.

Of the injuries, the most common were fractures, strains or sprains in arms and legs. About 18 percent of bounce house injuries involved the head and neck. Collisions, falling out or jumping off of the bounce house, and twisting a leg most often caused these injuries, the study notes.

Only about 3 percent of those injured were hospitalized. Seven was the average age of the injured patients, researchers note, and more than 50 percent of them were male. Most of the injuries reportedly occurred at a recreation place or at home.

Currently, there are no national safety guidelines for inflatable bounce houses, CNN reports.

The researchers of the study conclude, "This increase, along with similarities to trampoline-related injuries, underscores the need for guidelines for safer bouncer usage and improvements in bouncer design to prevent these injuries among children."

The Child Injury Prevention Alliance does list recommendations for safe bounce house use on its website. The alliance suggests users follow these safety rules when using the inflatable bouncers: