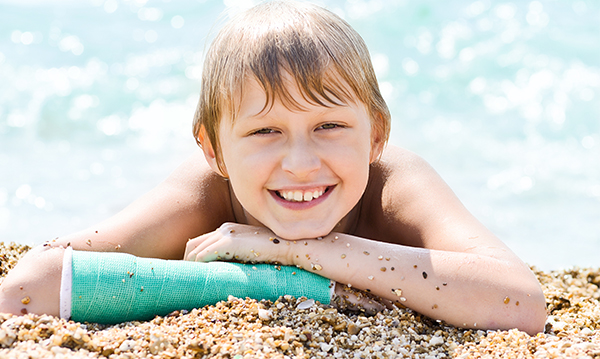 Summertime is synonymous with swimming, playground fun and backyard bonanzas. But it’s also a time when kids are more likely to run, jump and bounce their way to an injury such as a broken arm – and that broken bone can easily put a damper on his or her summer fun.

Thanks to Children’s Hospital of Michigan in Detroit, a broken bone doesn’t have to spoil your child’s summer season.

This year, metro Detroit kids who are in need of a cast – for an average of four to six weeks – can opt for a waterproof cast, which is offered at no additional charge to families.

Dr. Christopher Minnock, an orthopedic surgeon at Children’s Hospital of Michigan, was integral in bringing this cast alternative to metro Detroit families. Prior to relocating to Detroit two years ago, Dr. Minnock was training in Arizona where it’s common for physicians to use waterproof casts on their patients.

Two years ago, the answer was “no,” but in late April 2019, the hospital began offering the option to its 3,000 to 4,000 patients who receive casts annually.

“They essentially look the same. The cast is really a fiberglass shell that immobilizes and protects the limb,” he explains. “Underneath the fiberglass, there’s cast padding.”

And that padding, or liner, is the biggest difference between the two cast types. “The waterproof casts use a synthetic cotton blend that allows water to pass through it and dries out much more quickly,” Dr. Minnock says of the waterproof liner.

The waterproof cast is offered May through September this year when it’s warm enough that frostbite in a wet cast is not a concern.

In a state surrounded by water, it’s common for families to spend much of their summer at the lake, on a river or in a pool. But when a child has a broken bone and is wearing a traditional cast, which has a plain cotton liner, he or she should avoid getting that cast wet. If you get a traditional cast wet, bacteria will undoubtedly grow.

“That traditional cotton liner gets wet and stays wet for hours or even days,” he says. “We naturally have bacteria and fungus on our skin – and that stuff just starts to grow when the padding stays wet. This causes the cast to smell and irritates the skin.”

And if that liner doesn’t dry out, the cast may need to be changed.

“When a traditional cast becomes wet, we typically have to change the cast in clinic to avoid this skin irritation and wounds that can develop.”

Waterproof casts on the other hand, dry out completely in about 30 minutes, which means that kids and parents don’t have to stress about a little moisture during summertime activities.

“Parents don’t have to worry as much around bath time or running through sprinklers,” Dr. Minnock says.

Waterproof casts are not appropriate for all patients though. Patients who have had surgery or a fracture reduction in the Emergency Department still have traditional cast padding and cannot get the casts wet, Dr. Minnock notes. That area must remain dry at all times.

Content brought to you by Children’s Hospital of Michigan. For more information, visit childrensdmc.org/orthopedics.