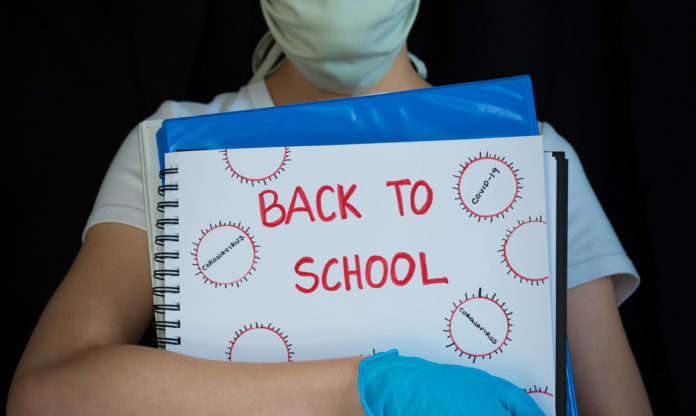 Back-to-school in the midst of the coronavirus pandemic is a mounting source of anxiety for parents around metro Detroit and Ann Arbor. Michigan has an official back-to-school roadmap, and some schools have also announced their own plans. But how are parents feeling as September draws nearer? Is it safe to send kids back or should we stick to remote learning and wait it out?

In our first-time enewsletter survey, Metro Parent posed these very questions — and others — to parents all around southeast Michigan. All told, 276 responded. The majority are parents to elementary school kids, but, regardless of their kids’ ages, though, they shared concerns across the board.

“My child needs interaction with other kids, and from what I hear, there won’t be any when they return,” said one parent. “I’m concerned about my children bringing the virus home to us, because we are immune compromised,” another said. Yet another put it bluntly: “The schools should never open again.” And one mom simply said, “SAFETY, SAFETY, SAFETY!”

Here, we take a closer look at how local parents are generally feeling about sending kids back to school this fall. Have something to say? Let us know right in the comments. Want to let your voice be heard in future surveys? Be sure to sign up for our Pulse enewsletter.

Question 1: What grades are your kids in now?

We wanted to get a sense of where families were at in their children’s education journey. The majority — 64% — had kids in elementary school, which we defined as grades 1-5. That was followed by kids in preschool or kindergarten at 32%, middle school (grades 6-8) at about 29% and high school at 20%. The remainder selected “other.”

Question 2: In light of your district’s circumstances, what option are you leaning toward this fall?

Those who want to see online only schooling this fall lead the pack with 36% of the vote. Not far behind were parents who feel comfortable with in-person instruction, checking in at 27%. Meanwhile, about 20% favor a hybrid.

A small group of about 5% is planning on home schooling, while the remaining 12% leveled with us: “I don’t know.”

3. What would make you feel safe to send your kids to school in person again?

Parents seem to be divided on the options we provided. All told, 1 in 5 parents feel safe sending their kids back to school now. The majority, though — at almost 29% — would prefer to hold out for a vaccine. And another 1 in 5 say their main concern is “stringent safety rules.”

Among the other options, 15% said “a decrease of cases in my area” is what it would take, and 12% feel like nothing will help them feel safe. The remaining 3% opted for something not on our list.

4. Which of these safety protocols for returning to school do you feel is most important?

Mask wearing was the easy winner in this category. Over 38% of parents think students and teachers should wear them the majority of the time. The runner up at 20% say frequently touched surfaces should be disinfected multiple times a day.

5. Do you think your kid would keep a mask on in school all day?

Yipes — this is a tough one. Nearly half of parents think their childmightkeep their mask, at least for some of the time. And a third say there’s no way that’s happening. Only 18% of parents feel pretty darn confident their child would mask up his or her entire time in the classroom.

The two top answers were just about a draw. About a quarter of moms and dads say distractions at home are the biggest issue, while another quarter say it’s tough to oversee their kids’ work while they’re trying to work themselves — it’s much more demanding. A lucky 14% say they really don’t have any issues.

The rest of our survey takers were split, with some 17% percent saying there’s a learning style conflict, 13% noting that getting their kids motivated is the main issue, and the final 3% saying they have a wi-fi or technology challenge.

7. Have there been any silver linings to virtual/remote learning?

Nope and sorta — those are the top answers here. A full-on 39% of parents declared, “it’s been rough”; no sugar-coating here. Hot on their heels, though, were 38% of moms and dads who feel the flexibility/self-pacing has been a benefit.

Meanwhile, 11% say their kids have been less over-extended, 5% feel it fits their kids’ learning styles better and 4% say there are actuallyfewerdistractions.

8. How supportive has your kids’ school been during this transition?

Some good news on this front. An overwhelming number of parents — almost 47% — say that their kid’s school has been very supportive and another 42% say their school is at least trying. Only 9% feel their school hasn’t been supportive at all.

9. What’s yourbiggestconcern for the 2020 school year?

Missing out on those hands-on, in-person learning opportunities — that’s what’s got most parents, 31%, worried. That’s followed by the 1 in 4 parents concerned about their missing out on social opportunities, extracurriculars, sports and milestone events. Another 18% are fretting about working from home and overseeing the kids, and 17% are concerned about their child’s mental health.

As for the final 6%? They said something else. As one mom put it, “Getting COVID! How is this not an option?” Very fair point. That’s definitely on the top of all of our lists.

What do you think of our survey results? Give us your thoughts and tell us where you stand in the comments.