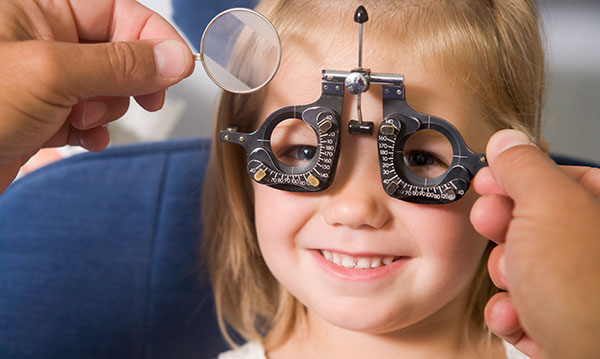 When Katie Mullin’s twins were born eight weeks early, they faced many challenges, including compromised vision and eyesight issues. Both were checked early on for retinopathy of prematurity, which can lead to blindness – and passed.

As they continued to grow and reach their developmental milestones, Mullin didn’t give the twins’ vision a second thought, until they were almost three.

“I noticed that Emily’s eyes looked crossed in pictures,” Mullin says. “Her well-visit was coming up, so I brought it up with our pediatrician. Sure enough, the pediatrician thought there was reason for concern and referred us to Dr. Elena Gianfermi at Children’s Eye Care.”

Her daughter was diagnosed with strabismus, also known as crossed eyes. Emily’s vision was also weaker in one eye than the other because the eyes were trying to overcorrect for the strabismus.

Thanks to her pediatrician’s recommendation, Mullin knew exactly where to take her kids for treatment. A pediatric ophthalmologist diagnosed her daughter by using unique treatments for non-verbal and young children.

For older children or those without a history of optic issues, an optometrist will do. However, the best place to start is the child’s pediatrician.

Traci Fritz, executive director of Children’s Eye Care, says pediatricians are a great first-line resource for vision questions, and in the case of an infant or non-verbal children, are preferred over an optometrist.

“Pediatricians are doing eye exams on children from birth. Some may refer things to a pediatric ophthalmologist, but they know what to look for. They are doing screenings, they are looking at the lenses of the eye, the visual equity and they are doing vision screening,” says Fritz.

Fritz cautions parents from taking their children to the local optometrists. She says the pediatric ophthalmologists have a unique training to prepare them for working with young children and treating conditions the children may face.

The training that is required to be an ophthalmologist is far more medically focused – something Mullin learned when she was informed that her daughter would need eye surgery to correct her vision.

“Surgery was the only option. Our doctor, Dr. Gianfermi at Children’s Eye Care, had to cut the muscles in her eyes and reposition them to the proper place. We had that back in August, and her eyes are perfect now,” says Mullin.

However, it didn’t come without a little prep work, which came under the guidance of the specialized pediatric ophthalmologist.

“The ophthalmologists complete medical school, do one year in internal medicine looking at the systems of the body that impact the eyes and then they do a three-year residence, sit for a national board certification and they have to regularly become recertified. Once they have done that, many ophthalmologists do a fellowship in a specialty like glaucoma, the cornea, retina orbit of the eye, neurology or pediatrics,” says Fritz. “The training of a pediatric ophthalmologist makes all the difference.”

Fritz says it’s not uncommon to see the orthoptics or the ophthalmologists doing whatever it takes to get a good exam of a child. She says most of the patients, about 60 percent of them, come to the doctors for misalignment of the eyes, but the doctors also deal with a wide range of eye challenges.

“We do everything from the simple things to the worst-case-scenarios, like blastoma, which is a cancer,” says Fritz.

Children’s Eye Care, like other pediatric ophthalmologists, doesn’t just present letters and shapes to the children on a screen and examine their ability to read them. Especially in younger, non-verbal children, their tactics involve other methods for making sure they are able to thoroughly examine their eyes.

Every child who is examined at Children’s Eye Care has their eyes dilated.

“We dilate every pediatric patient because we not only want to look inside the eye, but we also want to check their prescription,” says Fritz. “By dilating the eye, it relaxes the muscles that are doing the work to help the child see.”

This also assures children aren’t able to get glasses unnecessarily or avoid them when needed.

“If an adult were to wear glasses when they don’t need to, they wouldn’t do any damage. That’s the opposite for children in the developmental years. This time of their life is setting the stage for the communication between the eye and brain. We want to make sure that signal is clear and strong,” says Fritz.

Children’s Eye Care also encourages patching in children. Patches are placed on the “good” eye of children to strengthen their “bad” eye.

“Emily’s vision was weaker in one eye than the other because her eyes were trying to overcorrect,” says Mullin. “Before Dr. Gianfermi could do surgery to correct it, we had to get her eyes back to 20/20. This required patching of one eye for two hours per day.”

Fritz says parents are often troubled by the patching. She says it can be difficult for them to watch their children struggle to see out of the weaker eye.

“We have to make sure the vision in each eye is equal,” says Fritz. She explains that when one eye is stronger, it will take over and the child’s brain will essentially shut off function to the bad eye, leading to neuro-blindness.

When to get an exam

“As part of the Affordable Health Care Act, every child from 0 to 21 years old must have a health plan that offers a routine eye exam,” says Fritz. She says it’s recommended that children have some type of eye exam before preschool.

Fritz also says that parents should contact their pediatrician if they notice the child’s eyes drifting, if the child is tilting his head when reading or watching TV or if the child is exhibiting signs of not seeing well.

“When in doubt, ask your pediatrician,” says Fritz. “They know what to look for and can also be a great resource in determining if your child needs an ophthalmologist or if you can see an optometrist.”

Kids with Gold Eye in Digital Photos Could Have Disease