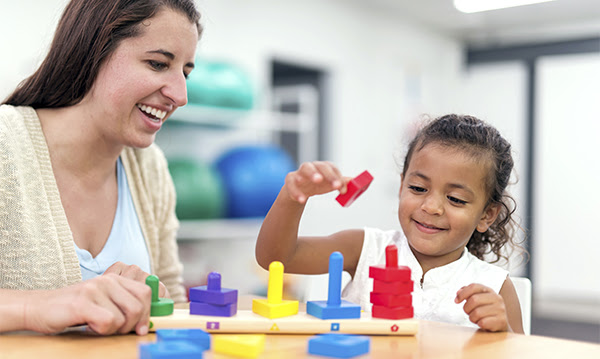 Parents of children with autism are always on the lookout for the best ways to support their kids.

The most common type of therapy they’ll hear about is ABA – and there’s a good reason for it. Applied behavior analysis is often considered the “gold standard” of autism treatment and it’s becoming increasingly popular in Michigan thanks to an insurance mandate that requires it as a covered benefit.

But what exactly is ABA therapy? It’s often misunderstood, experts say. That could be because it looks a bit different for every child, says Leah Adamik, chief clinical director at Total Spectrum, which provides in-home ABA services to kids with autism in the Midwest, including throughout southeast Michigan.

“We meet the child where they’re at,” she says. “What skills are they missing, what areas are they having the most difficulty with?”

That’s where the therapy will start, whether it’s daily living skills, social skills, preaccidenic skills or something else.

“It’s breaking those things down into really small parts and then teaching them in those small parts,” Adamik explains. “We’re always evaluating how it’s going and changing our teaching method for that child.”

ABA is backed by scientific research, which sets it apart from many other treatments. Using known principles about how people learn, behavior analysts apply specific techniques and interventions to bring about behavior changes. Behaviors are reinforced using whatever “reinforcer” is most effective for the child – it could be social praise, playing a game, a toy, a piece of candy or time on a swing.

“By nature it’s repetitive, and intensive, and we’re following set principles of how behavior changes for anybody,” she points out. “It’s not just kids with autism; when you really break ABA down, we’re all under those same set of principals. We do things more often when we’re reinforced for doing those things.”

People who’ve heard of ABA sometimes picture a child sitting at a table, responding to systematic commands and receiving something like an M&M for each correct response. But that’s a common misconception, Adamik says.

“The goals are still written the same way and we’re still evaluating every trial, but it doesn’t look as rote as people imagine,” she says, adding that rewards like candy or stickers are gradually phased out as each new skill is learned and generalized. “People picture a child sitting and doing drills all day. You might have some of that – obviously they learn certain skills better in that way – but you’re also going to see a lot more natural environment teaching.”

Total Spectrum provides ABA therapy to children as young as 2 years old and up to age 17. For younger kids, the therapy is typically more playful.

“There could be some table-work if they have difficulty sitting and attending for a certain amount of time but if you’re working with a 3-year-old, that’s not really the goal,” she says. “It would be more play-based.”

Kids who receive ABA usually spend around 15 to 20 hours per week in therapy, usually in their own home but sometimes at school. A board-certified behavior analyst oversees each child’s program and progress while registered behavior technicians apply the interventions.

Goals vary for each child. If the parents are struggling at home because their child is afraid of bathtime, for example, the therapist might start with baby steps – first working on walking into the bathroom, then practicing without any water, and so on. Breaking the process down into small steps helps – whether it’s for a bath, learning to verbalize requests or teaching homework skills.

“Every kid is different. No child responds even to going to school the same way as every other kid,” Adamik explains. “The first child I did therapy with went from being a really challenging, very aggressive child that scratched and pulled hair and didn’t talk, and once he was actually given more functional communication he was just a brand new kid. It was really cool to see that transition … to a child that communicates. We definitely see those big turnarounds.”

Parents should know that early intervention is best. It’s also important to find an ABA provider that incorporates parent training – “it takes a team,” she says.

“The younger the child is, the faster we might see that progress,” Adamik says. “I’ve had so many families start when their child is 8 years old and has significant challenging behaviors and say, ‘I really wish I wouldn’t have waited.’ Everybody has to do what they feel is right for their family and for their children. It is really kind of amazing the kind of progress that can be seen when the therapy is a good fit for the child.”

For more information or to schedule an evaluation, call 844-263-1613 or visit totalspectrumcare.com.