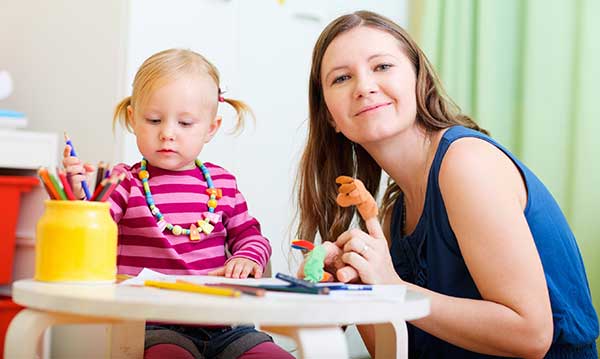 As a television news reporter, Jennifer Guerrieri originally of Dearborn now living in Houston, works non-traditional hours. When she welcomed her daughter into the world a little more than two years ago and began her search for child care, she quickly came to realize that day care simply wouldn’t work for her and her husband who is also in the news business.

“There is no way my husband or I could get to a day care center to pick Aubrey up by 6 or 6:30 p.m., which is the time when most providers close,” she notes.

It became apparent to Guerrieri that an au pair might be her family’s best option. Now on her third au pair and expecting a son in May, she knows the decision was the right one.

“With an au pair, there is a different level of trust,” she says. “When someone is living in your home, she becomes a part of your family. We eat together. We go to church together. We take vacations together.”

Guerrieri recommends an au pair to anyone who asks but caveats her endorsement of the arrangement with the disclaimer that it works so well because her home has the necessary space.

“Our au pair has her own room and her own bathroom on another floor,” she says. “This helps because we’re not in each other’s hair all of the time. If we were living in a tiny New York City apartment where we were constantly on top of each other, I’m not sure it would work quite so well.”

Jeannine Lambrecht of Rochester Hills is the Midwest area director for AuPairCare, one of the 15 designated au pair sponsor organizations in the United States. She and her family have themselves played host to eight au pairs over the years. Now she and another director oversee the 55 to 60 au pairs her agency has placed with metro Detroit families.

“The benefits of an au pair are many,” Lambrecht notes. “Among them are flexibility, cultural exchange for your kids and cost.”

Lambrecht explains that host families must pay their au pair $195.75 per week, and in return, the family gets 45 hours of care per week. Host families are responsible for their au pair’s room and board and must pay $500 toward the six credits of schooling the au pair must undertake during her time in the United States. Annually, the host family must pay the sponsor organization a fee of somewhere between $7,500 and $8,600 depending on the agency. AuPairCare falls in the middle at an annual fee of $8,030.

“An au pair can be particularly cost effective if you have a large family,” says Guerrieri of the cost for au pair care. “You pay the same amount if you have one child or five.”

Where it can add up quickly is in the extras. Guerrieri and her husband, who have found their au pairs through Cultural Care, Inc., have provided their au pair with a car and have thus added each subsequent au pair to their auto insurance during their time with the family.

“Because our au pairs have been under 25 years old and are international drivers, the rate doubles,” Guerrieri points out. “We also provide our au pair with a cell phone. You don’t have to, but when someone is driving your car with your kids in it, you want to be able to reach her.”

Despite the additional costs, Guerrieri says the au pair way affords her family the flexibility it requires.

“I often work from 2 in the afternoon to 11 p.m. or midnight,” she explains. “My husband typically works from 8 in the morning to 8 at night. We set the schedule with our au pair so she knows at the beginning of the week what hours we’ll need her. If I need to work late or go into work early, she is able to help us. That’s the beauty of an au pair. We know if we’re running late that Aubrey is in her own home and that our au pair can put her to bed.”

The U.S. Department of State administers the J-1 visa that au pairs take advantage of for their time in the United States. The visa enables au pairs to stay in the country for 12 months with the option to extend their stay six, nine or 12 more months.

Guerrieri’s first au pair came from Brazil, her second from Germany. Her current au pair, who just recently arrived, is also from Germany. Though Guerrieri would have liked her first two au pairs to have extended their time in the U.S., the girls were homesick and opted to return home after one year.

“It’s definitely hard when they leave,” Guerrieri admits. “But it’s just like school when a child gets a new teacher every year. Your child benefits from change.”

Guerrieri is also quick to acknowledge the benefits of her au pairs’ varied experience.

“Our first au pair’s English was not as good as our second au pair’s, but our first had significant infant experience. She was a perfect fit for when Aubrey was a baby.”

The Guerrieris’ current au pair has older child experience and previously worked in a kindergarten. It’s an arrangement that didn’t happen by coincidence. Guerrieri and her husband were able to select the criteria important to them early in the match process.

“You select the country or countries you’re interested in hosting an au pair from, the au pair’s age (which is always between 18 and 26 years old), their level of experience, driving experience and more,” Guerrieri explains. “This narrowed the search so we were able to read through the profiles of those who had the background and experience we were looking for.”

Lambrecht notes that some families interested in exposing their children to a particular language or culture request au pairs only from, for example, France or Germany so the kids are continually exposed to that country’s language. Her own family has hosted au pairs from Poland, Estonia, Germany, the Czech Republic, Norway and Mexico exposing her children to many diverse cultures throughout their childhood.

Lambrecht emphasizes that extensive background screening is conducted on all au pair candidates.

“They go through a rigorous application process in their home country,” she says. “They get a medical check, a psychiatric test, an English test. They must obtain police clearance. And if they’ll be working with kids under the age of two, they must have at least 200 hours of relevant experience.”

To prepare for their arrival, the host family must provide their au pair with a private, legal bedroom.

“A private bedroom is a necessity,” Lambrecht says. “It must be a real bedroom. If it is in the basement, it must have an egress window. Fire hazard is always a concern.”

Host families must provide au pairs access to a car and may not work their au pairs more than 45 hours a week or 10 hours in a day. Au pairs must also be given two weeks of vacation per year.

“I tell families and the girls to give it two weeks for the homesickness to wear off,” she says. “Usually by then, the au pair feels a good balance.”

For those situations where the match is not a good one, families can ask for a rematch.

“If it’s a bad match, I serve as mediator,” Lambrecht says. “I come out to the house, and we discuss the problems. Often we can work it out.”

For their part the Guerrieris strictly adhere to the Department of State’s guidelines about number of hours they work their au pairs, and they try to be as fair as possible.

“If we ask our au pair to work late one day, we make it up to her the next day,” she says. “A happy au pair is a happy host family.”

Guerrieri acknowledges that some people have a strange reaction when she first tells them about their child care setup indicating they wouldn’t be comfortable having another person living in their home.

“Oddly, it isn’t odd,” she says. “Working moms understand how great it is to have a second set of hands there to help.” 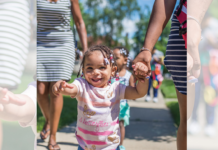 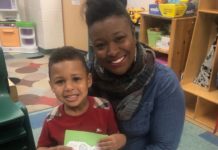 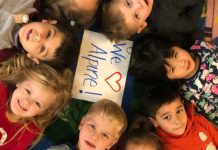