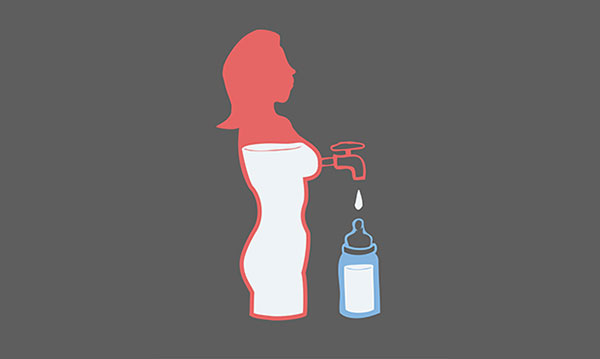 BBC thought a one-week suspension was enough of a slap on the wrist for Alex Dyke, 53, father of three and a morning DJ, who went on a tirade last month against moms who breastfeed in public, the Daily Mail reports.

He had asked listeners to phone in about the “taboo subject” of breastfeeding in public during the Aug. 12 morning broadcast. But it was Dyke who stole the show.

“Couldn’t mums just stay at home and do it?” he said. “I’m not offended by it, I’m just made to feel uncomfortable about it.”

In other words, the primary goal women breastfeeding in public have is to make grown men squirm. Dyke makes it clear he’s not to be held responsible for his squeamishness. And he lets the world know who’s responsible for his recent post-traumatic stress directed at moms who dare to use their breasts the way God intended.

“I experienced this yesterday,” he said with all the pomp and circumstance of introducing a ghost story, The Guardian reports. “I was on a bus and there was a lady on this bus. She was quite a big girl and she had a toddler with her. She starts to breastfeed her baby on the bus. I didn’t know where to look. She’s putting me in an embarrassing situation.

“I didn’t really realize what was going on,” he continued. “I wanted to look away but the bus was packed. Breastfeeding is unnatural. I know its natural but it’s kind of unnatural.”

This man, and he’s not the only one, seems to have forgotten that the first pair of breasts ever pertinent to his well-being was his mother’s, and not the oodles of women unfortunate enough to be ogled and sexualized by him on the regular.

“Making love is the most natural thing in the world but you wouldn’t do it on the No. 15,” he insisted.

The difference is grown men are expected to have enough self-control to not cry for a boob on the bus compared to a child who simply knows he’s hungry and that when he cries, he’s fed.

Dyke continued to shed light on his true terror when he divulged that “yummy mummies” never breastfeed in public. “Those kind of women wouldn’t do it because they’re very image-conscious and they know it’s not a great look.”

Meaning conventionally attractive women who adhere to the status quo save their boobs for private spaces and “hungry” men, and only ugly women crave attention by feeding their hungry babies in public.

The ones who don’t look like the models in yogurt commercials whose eyes roll with every spoonful of berry blitz. News flash – unless starving, no one moans at yogurt.

Dyke went on to accuse women of “always pushing the boundaries and making us feel uncomfortable,” and insisted that men not repulsed by women breastfeeding in public are “wimps.”

While Dyke presumptuously rallied for his fellow men, I think it’s safe to say not every man would let this misogynistic buffoon speak for him.

As one might suspect, Dyke was suspended, and an online petition started making its rounds, requesting Dyke be permanently taken off the air.

The petition, which stated “There is already a stigma around breastfeeding, and we don’t need ill-educated misogynists like Alex Dyke to make it even more apparent. … We’re not in the Stone Age anymore – we’re in the 21st century. Breastfeeding is completely natural, and people must remember that breasts are for feeding – not for men,” sums up the insolence of Dyke’s rant.

There’s no shortage of means by which women are sexualized every day, and when they use their bodies in a manner that’s not sexually charged, the chauvinist spectators have something to say.

More than 6,000 advocates signed before the petition was removed when Dyke returned to work a week later, but not before people directly took their complaints to Ofcom, a UK communications regulation agency.

Now, the agency “is investigating whether the potential for offence caused by the presenter’s comments about breastfeeding were justified by the context,” an Ofcom spokesperson told the media.

But all is well! Dyke apologized for his offensive comments and promptly explained himself: “My point was fat chavvy mums with their boobs out on buses isn’t a good look. A classy, discreet mum is absolutely fine.”

Thanks for clearing that up.

What do you think about this radio show host’s comments?